Roughly six months ago, I put up a blog post suggesting Android was going to be the dominant mobile phone operating system and that developers interested in the largest user bases ought to start developing for it in preference to iOS.

As you might expect, I got a lot of heat from Apple fanboys for that post and one of the strongest points they made was that we had not yet seen the effect of the Verizon iPhone on market share numbers.

Well now we have. iPhone had a fantastic February on the back of a strong launch of the Verizon iPhone. comScore's February mobile numbers are out and here's where things stand in terms of OS market share in the US. 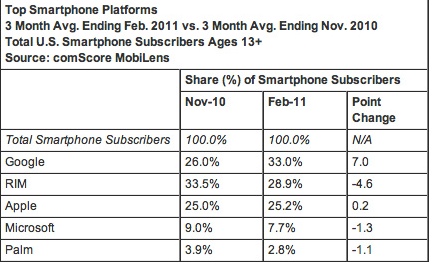 It looks like the Verizon iPhone launch is helping iOS hold its own with 25% of the market. I expect (and hope) that iOS will remain a strong competitor to Android. But as I've been saying for several years now, I believe the mobile OS market will play out very similarly to Windows and Macintosh, with Android in the role of Windows. And so if you want to be in front of the largest number of users, you need to be on Android.

Finally, the reason for all of this is that Google is not attempting to monetize its mobile OS. It has created a business model for Android that is very attractive for handset manufacturers and allows these OEMs to drive down their costs rapidly while continuing to deliver a top quality smartphone experience. Bill Gurley of Benchmark wrote a great post about Google's mobile strategy earlier this week called "The Freight Train That Is Android". If you want to understand why this is happening, go read it.

UPDATE: This comment thread (almost 600 comments) is probably the most active comment thread in the history of this blog. The comments keep coming in five days later. Because I read and consider replying to every comment on this blog, this thread is creating a fair bit of work for me. And I believe we've had a very good debate about the issues this post raised. So I am closing comments on this post.