We arrived in Palm Springs really late last night and I woke up too early (I always have trouble adjusting to new time zones). So I got up and went out looking for a good espresso. I'm not a fan of Starbucks coffee and since I only have one cup of coffee a day, I try to make it a really good one.

So I pulled out my phone and launched Foursquare and selected the Explore tab and typed in espresso. It looks sort of like this (I pulled this image off the internet): 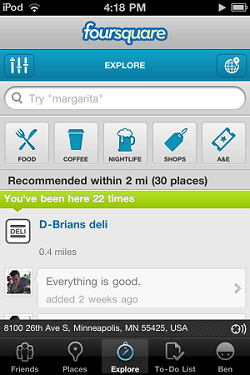 I was directed to a place called Just Java where I was able to get a very nice macchiato.

I don't use the explore tab when I'm in NYC because I know where I want to go. But whenever I find myself in a new place looking for something in particular, I've been using the explore tab in Foursquare. And it works pretty well.

And as I checkin more, my friends checkin more, and the places I like to frequent get more checkins, the explore tab will get better and better. This is the power of social metadata at work.