There Aren't Many Exits Over $100mm

I was reading Mark Suster's latest blog post (actually its a presentation embedded into a blog post) and I came across this slide. 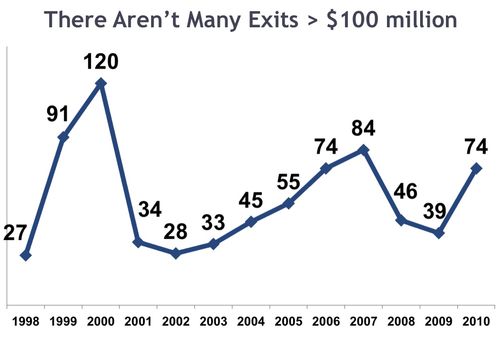 I don't know what the source of this data is and I don't know if this is just M&A exits or if it includes IPOs as well. It really doesn't matter for the basic point that Mark is making with this slide.

Based on the NVCA statistics on the venture capital industry, there are on average 1,000 early stage financings every year. I suppose a few of those 1,000 financings are for the same company, but I doubt that many are. So we can use 1,000 as an approximation of the number of companies that get funded in a given year.

At at time when the average Series A round is now north of $20mm (based on very anecdotal evidence and not at all scientific), this poses challenges for the VC industry.

The real math is a lot more complicated because of follow on rounds and such, but in order to keep this simple, let's assume all Series A deals are done at $20mm post-money and 5% of them end up exiting for north of $100mm. And let's assume that the average valuation of the exits north of $100mm is $250mm (I think that's a good guess but it could be off). That means you don't get your money back on your entire 20 investments with the one that has a good exit. The simple math is 20×20=400 which is greater than 250.

If the average valuation of a Series A deal is $10mm, then the cost of 20 early stage deals is 20×10=200 which is less than 250. That means the winner pays for the rest of the deals. And that is the model that I know works in early stage VC. Anything else is going to be challenging for the industry.

Are we in a valuation environment that is challenging for early stage VC investors? Yes.