Kevin Cheng (aka @k), product manager at Twitter and an all around smart guy wrote a great blog post called Can We Ever Digitally Organize Our Friends?. I've been thinking many of the same things that Kevin wrote about since I started to use Google+ a few weeks ago and Kevin's post is a good opportunity to riff on the same ideas. But first, a bit of humor courtesy of someecards: 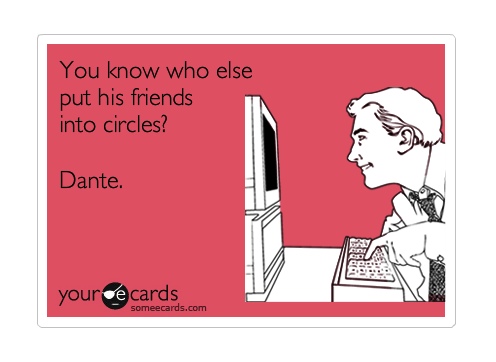 With that out of the way, here's my thinking on grouping things. I don't like to be that organized personally. I don't file stuff away very well. I never liked folders in outlook. I use a few labels in gmail (about 20) but I label less than one out of every 100 emails I get. I've created two twitter lists (one automatically). I follow two twitter lists. I belong to one or two google groups. I belong to less than ten Facebook groups. I am sure that there are many people out there who are different, who love to organize, file, group, and structure their lives and work. But I'm not one of them.

So when faced with the chore of taking all my friends and colleagues and dropping them in buckets (or circles as it were), I tired of that chore quickly. I stopped at about 20 people. And I am not eager to go back. It is not fun. It is work.

I did create two groups that I think are particularly valuable; my family and our firm. These groups are well defined, they are finite, and they don't change very much. I can see sharing things with these groups in Google+ and I'm happy to have that resource at my finger tips.

How about the people I share music and music interests with? That's a passion of mine. But I'm finding new people all the time. I met Tyrone Rubin in a room on Turntable a few weeks ago. I started following him on Tumblr right away. I could have added him to a music circle on Google+ too. But I didn't. If he had an "add me to your music group on Google+" on his Tumblr, I might have clicked on that. But short of that, it becomes too much for me to do such a thing.

The point I am trying to make, which Kevin makes so well in his post, is that friends and interests are not so finite and fixed. They come and go. They are highly fluid and dynamic. And as such, there are very few groups that I want to build explcitly. Family yes. USV colleagues yet. Anything else, no thanks.

This is an oppportunity to use machines. And Google is doing this with Google+. The recommendations on who to add to what circles are amazing. So why make me do the drag and drop thing other than it is fun and cool to do that on a computer? If Google+ knows who my music friends are then just suggest "music friends" when I hit the share button and send it on. Do I care if it goes to a few people who aren't actually my music friends? No I do not. Do I care if a few of my music friends don't get it? Yes, but then I can add them explicitly. I trust Google to do a fine job of this for me. They've proven themselves worthy of the job so many times in my relationship with them over the years. I trust that they can build algorithms like this as well or better than any other company out there.

There's an iPhone app called Katango that apparently does this for Facebook friends. I don't have an iPhone so I have not tried it out. But I hear it is pretty amazing. That's an example of computers doing the work for you so you don't have to do it. That's what I think we should be doing in terms of creating more granularity in our social graphs. I don't want to put my friends into circles. I want a machine to do it for me.