Our portfolio company Boxee released Boxee For iPad yesterday. I downloaded it on a couple of our iPads around the house today. It's a free app so you can put it on all of your iPads. 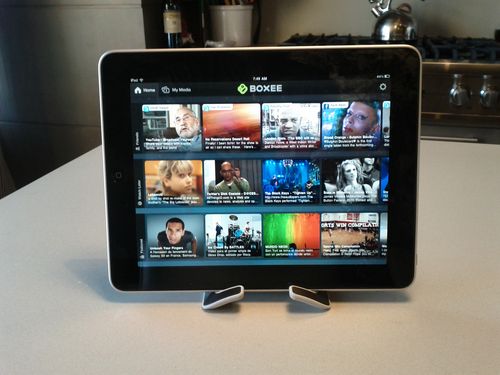 Here's a short video demo of one of the videos on my home screen running on the kitchen iPad:

There are a number of nice apps for aggregating and streaming video on the iPad including Fanhattan and Shelby. But Boxee brings a few new innovations to the world of iPad video.

First, Boxee has a "my media" tab. If you look closely at the top picture on this post, you can see it just to the right of the Home tab on the upper left of the screen. This tab will provide iPad streaming of video files you have on your local network via the Boxee Media Manager, which you can download here and install on all the computers in your home that have video files on them. I know that I wrote yesterday that files are on their way out, and in fact I don't have any local video files of my own, but I am equally sure that there are many of you out there who have large libraries of video files on your network. If you are in that camp, this feature is killer.

The second feature is "experimental" and Boxee CEO Avner Ronen explains it in his post about Boxee For iPad on the Boxee blog:

We’ve also got something from the “wouldn’t it be cool if Boxee could..” department – one of our engineers has been playing around with AirPlay and we’ve included it as an experimental part of this release. When you click on the AirPlay button on your iPhone/iPad/iPod Touch you will now see your Boxee Box as one of the target devices. Give it a try and let us know what you think!

With AirPlay you can take any video you have on your iPad and play it on your TV via the Boxee Box. That's super cool and I hope this feature makes it out of Boxee Labs into the core Boxee offering at some point.

That's it for now. Give Boxee For iPad a try and let me know what you think.