When you see a stock chart like this you have to wonder, what the hell is going on? 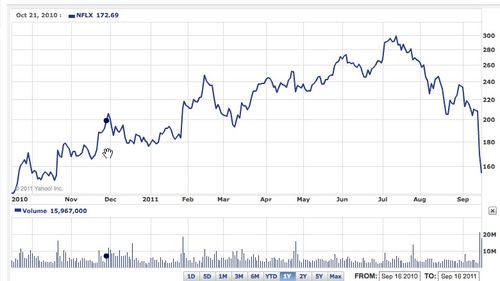 Netflix has been one of the hottest stocks out there, rising from $50/share in Feb 2010 to $300/share in July of 2011. That's six times your money in 18 months. And now the stock has given back well over half of those gains in two months and that freefall in the past week seems particularly scary.

But as Dan Frommer points out in this excellent post on Splatf, the street may be overreacting to Netflix's downward guidance. Netflix has pulled off one of the most amazing customer transitions I've seen. They used a dominant position in the physical distribution of DVDs to build a dominant position in the streaming business. That's damn hard to do and it is something you rarely see because it is difficult for most companies to cannibalize a highly profitable franchise.

But let's go back to Dan's post. Look at this slide:

Netflix told the street that they are now expecting 1mm less subscribers by the end of this year. That's a big miss. But as Dan points out, 80% of that miss is coming from the DVD side of the house. By the end of this year, if the current guidance is correct, Netflix will have 21.8mm streaming customers. That's a huge customer base for the next important film and TV distribution format.

Netflix will produce about $500mm a year of EBTIDA based on a "back of the envelope" calculation I did using Google Finance. With a market cap that is now down to about $8bn, the stock now trades at 16xEBITDA. That's a lot better than 32xEBITDA where it was two months ago.

I don't own Netflix. I don't own any public stocks in my own account these days and haven't since I closed out positions I bought (and blogged about) during the market meltdown in 2008. I do have some managed models on Covestor and some hedge fund interests. They may own Netflix, but I'm not aware of it and if they do, my exposure to Netflix would be minimal. I am not going to go out and buy Netflix after writing this post.

But I do think what we are witnessing here is the speculative forces coming out of a stock in reaction to some bad news. My instinct is that Netflix is still the company to beat in premium streaming video and that they are building a killer franchise in the next important distribution system for film and television shows. And thanks to some excellent analysis by Dan, we can see why that is so.