The other day my friend Ben Kweller released his new record, Go Fly A Kite. I wanted to give Ben a little help getting the word out. So I used a new feature on Tumblr to create this:

Yesterday our friends at Spark Capital announced that Nabeel Hyatt had joined their firm as a Venture Partner. Bijan used that same new feature on Tumblr to create this: 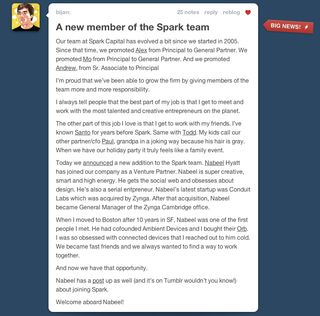 This feature is called "Highlight This Post" and it is available at the lower right of the post creation screen in Tumblr.

Highlighting a post cost $1. The highlight activity happens in the Tumblr Dashboard. For as long as the post is active in dashboards, it will carry the highlight. I put $20 into my Tumblr credits early this week and will use the Highlight feature as need be. I haven't highlighted a post since the Ben Kweller post, but I certainly expect to use this feature regularly.

Highlight This Post is one of several parts of the Tumblr promoted suite. I don't want to reveal what else is coming but I can assure you that the other features will be as fun, clean, and native as this one.