Our portfolio company Kickstarter soft launched a feature this week that I've been begging for since the early days of the service. It is called Follow Friends and it looks like this: 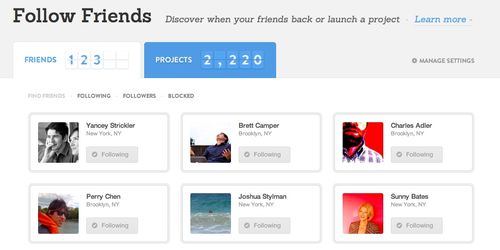 As you can see, I am following a total of 123 friends and they have backed a total of 2,220 projects. However, it's not the projects they have backed in the past that is the big deal. It is the projects they are backing in real time. When they do that, I get an email letting me know they backed a project, with a link so I can go join them. That's the feature I've wanted since the early days of the service.

My friend Whitney built a hack that did this a while back. He called it Kisttr and I used it along with a bunch of friends. It worked well but Follow Friends is the fully implemented and integrated version of this simple idea.

Of course, this is nothing new for web services. This is state of the art actually. It's amazing that Kickstarter has gotten so huge without a social fabric.

I'm excited to see how Kickstarter evolves this social fabric now that they have it. I think this simple feature just made Kickstarter so much more awesome. Thanks Kickstarter team for finally giving me my #1 feature request.