We've talked quite a bit about the fragmentation of social media here at AVC. Blogging at WordPress, sharing photos with your friends on Facebook and with the world on Instagram, Tweeting at Twitter, Checking in on Foursquare, Pinning on Pinterest, Tumbling on Tumblr, sharing video on YouTube and audio on Soundcloud. This is where things are going.

There are many reasons for this fragmentation and we've discussed them. I think the big reasons are the move to mobile where features are delivered via an app on your home screen rather than inside some monolithic web app and the desire to curate application specific social graphs instead of one graph to rule them all.

But regardless of why this is happening, it is happening. And so there is an opportunity to aggregate all of this activity on a single URL where followers can see the totality of a person's social activity.

Enter RebelMouse. Created by former Huffington Post CTO Paul Berry, RebelMouse launched last week in invite only mode. You can request an invite, it's not a velvet rope kind of thing. 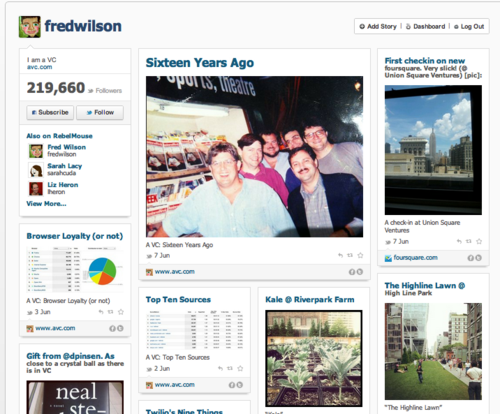 Here are some other RebelMouse pages:

On the upper left of every RebelMouse page there is a link to find other pages to look at. Discovery is pretty raw at this time but there is clearly an opportunity to do a lot more with it.