This last issue is where Tawkon has been focused. Tawkon is a bunch of smart Israeli scientists and engineers who have built algorithms that run on a mobile phone and predict the amount of radiation your phone is emitting in real time (and over time). They've been around for a few years and they have correlated their algorithms with real laboratory testing to insure that their predictions are accurate.

I met with the founder, Gil Friedlander, last week and during our meeting I downloaded Tawkon to my Android phone. I've been using it since. Most of the time it just runs in the background and I forget it is there. But every once in a while, it wakes up and alerts me to take the phone away from my head, put it on speaker, or put on a headset.

On friday afternoon, I was in my apartment where I get poor reception, and I was doing a few conference calls. In each case, Tawkon alerted me to the fact that I should not do the call without a headset and I took  the advice.

Tawkon also aggregates my radiation exposure and phone activity over time and keeps a record of it. This is what last week looked like for me:

You can also track family members so you can be a nagging spouse or parent. I suggested that the Gotham Gal download Tawkon for that exact reason.

Unfortunately Tawkon is not available on iOS. Take what you want from that fact. So I can't get my kids on Tawkon as much as I'd like to. I really can't understand why Apple would not approve a wellness app like this but iOS is Apple's world and they can decide who gets to play in it and who doesn't.

As with any app that runs in the background, I've been concerned about its impact on battery life. I look at what apps are using battery regularly and have not seen Tawkon on that list and I also have not noticed any difference in battery life since I have installed Tawkon. Of course, I've only been using it for a week so I can't say with 100% confidence that this is not an issue.

Here's a picture of me in the meeting with Gil practicing good cell phone hygiene. I have one of those handsets in my office and my home. I use them all the time. 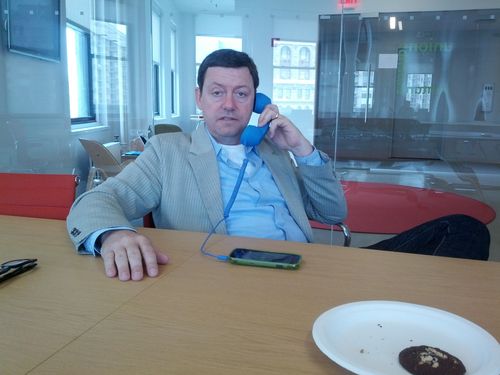 Tawkon is available on Android and most Blackberry phones. You can also put it on jailbroken iPhones. Give it a try and let me know what you think.