Hurricane Sandy looks to be coming through NYC at that time and I don’t know what that may cause me and my family to be doing at that time. We live right on the Hudson, at the border of Zone A. So I’ve got a few things on my mind today that fit right into this Sustainability theme….

Stay safe everyone on the east coast today. Let’s hope the hype is overblown. And let’s prepare as if it isn’t.

On my way back from a business breakfast, I saw folks in Hudson River Park looking at the Hudson River so I walked over and recorded this video of the Hudson breaching its banks around 10am eastern.

That was the moment I knew that our street would turn into a lake. I just felt it in my gut. Around that time my partner Albert posted this on his tumblr. We traded a few comments and he led me to this page on NOAA’s website. This was the chart I was tracking all day yesterday: 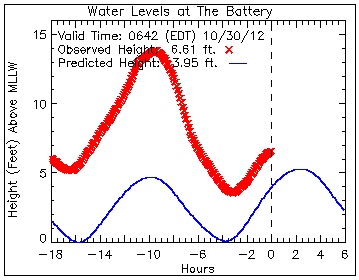 At the time I took that video the water height on this chart was around eight feet. You can see that it peaked at about 14.5 feet. That’s 6.5 feet higher than the time of my video.

After our monday team meeting (which we did on Google Hangouts with great success), I went downstairs and explained to the Gotham Gal and Josh that we should evacuate. I got a little pushback from both but mostly from Josh who thought we could ride out the storm in our apartment.

I was adamant that we should leave. I told them that our street was going to become a lake (or worse a river) and that we would lose power and things would be a mess. I finally won them over and we headed out around 4pm. We went uptown to stay at a friend’s house on higher ground. Before we left, the Gotham Gal and I went to the basement storage room and removed all family heirlooms and anything we couldn’t replace easily and took them upstairs to our apartment. But we forgot to empty the ice makers in our apartment (which caused me to wake up in the middle of the night last night with an “oh shit” moment).

We spent the rest of the day following events on Twitter and TV. The Mayor’s regular updates on TV were helpful, but by far the best coverage of Sandy was on Twitter, with links out to blogs and Instagram. That led me to tweet this out yesterday night.

Our street in the west village did in fact become a lake with somewhere around 5 feet of water at the height of the storm surge. Our building’s basement was submerged and our ground floor apartment which houses the Gotham Gal’s office took many feet of water. The building lost power and I suspect it won’t have it back for a while. It was a disaster from which we will be impacted for months I suspect.

But as bad as our street and building had it, much of NYC had it worse. Lower Manhattan and parts of Brooklyn were flooded way worse than the west village. The subway system took the most severe  flooding of anytime in its history. Many of the subway tunnels between Manhattan and Bronx, Queens, and Brooklyn are flooded. And some of the automobile tunnels are flooded too. There have been power plant explosions, fires, and all sorts of other Sandy related calamaties.

It was a big storm and it wreaked much damage on NYC last night. But the loss of life was relatively low and from what I can tell, city officials and the first responders in the fire and police department did their usual heroic job. We will get through this the same way we have gotten through other disasters.

I may take the week off. I have a lot to tend to on the home front and NYC is not going to be the easiest place to live and work this week. My son’s school is almost certainly closed for the next few days.

But I’ll likely keep blogging. It helps to be able to talk about this stuff, to get it out, and to discuss it. So we can start doing that while my family and I start digging out.