It's pretty common practice these days to pull out a tablet or phone during big live events and watch on two screens. The industry has taken to calling this the second screen experience. Or social TV. It's an area our firm has a few bets in, most notably Twitter and GetGlue.

But last night during the debate, I found myself in need of more screens. I could have used something like this: 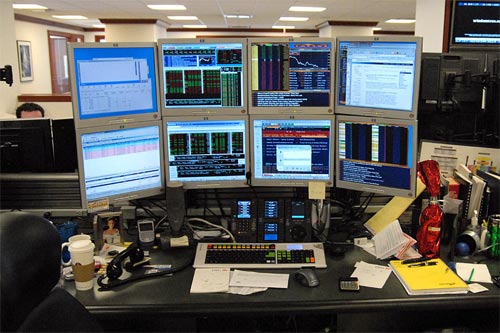 I had the #debates feed on my personal Nexus 7. I had John Heilemann's twitter feed on my phone. I had Tumblr going on my laptop. And I had CNN on the family room Nexus 7. And I was actually watching the debate first and foremost.

The big surprise was how active Tumblr was. The memes were coming fast and furious during the debate. The binders full of women meme was active within minutes of that line emerging from Mitt's mouth. The debate tag was also a great one to follow on Tumblr last night.

Based on the tweets I was seeing flying by on Twitter last night, I am certain that I'm not the only one who watched the debates this way. Actually I am pretty certain that this is becoming more normal by the day.

It all makes me wonder if the current crop of social TV apps are missing a big aggregation opportunity. I suspect lots of good stuff was going on elsewhere last night (Facebook, Pinterest, Canvas, etc), but I just didn't have enough screens in my family room to be everywhere at the same time. Maybe we need an app for that.