My friend Darren Herman helped me think about this post. He sent me this deck along with some thoughts. This slide from Darren's deck is a good place to start this discussion:

It is true that the vast majority of consumer web apps have been and continue to be monetized with advertising. On mobile that is less true, but becoming more true every day. 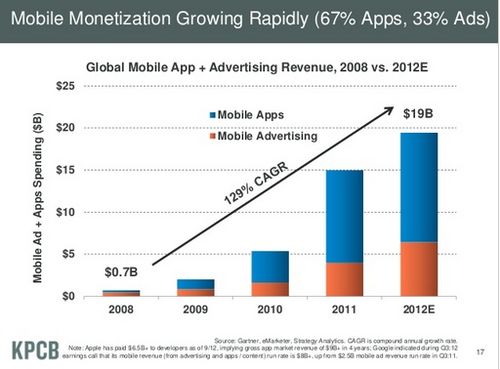 There are all sorts of ways to generate advertising revenue online. Here are the entries under the advertising category in our revenue model hackpad: 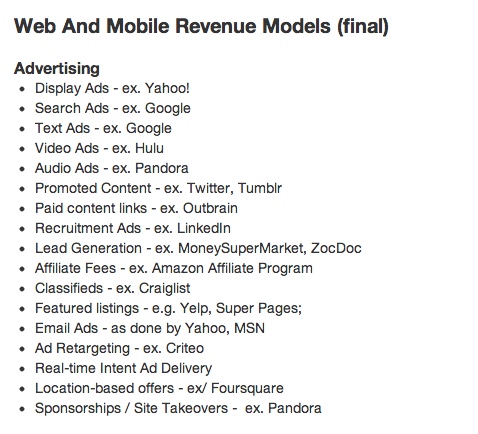 This list is most certainly not exhaustive but it does cover the most common advertising approaches and you can see how many there are on the Internet. There has been a lot of innovation in this sector in the past 18 years since the first banner ads were created and sold.

And this market map is by no means exhaustive either. Online advertising is a big and complicated business.

I would break up advertising into two big buckets; ads that are sold and ads that are bought. The first is a relationship business, requires a direct salesforce or a salesforce that you can tap into, and will bring a higher revenue per impression in most cases. The latter is a data business, automated by machines and software, is a volume game and will bring a lower revenue per impression in most cases. Much of the online advertising market is moving inexorably toward the latter category, for good and bad.

The reaction to this move away from high value "brand" advertising to commoditized and programmatic advertising is native ad formats and advertising models. I have written about native advertising at AVC before and am a big fan of this approach. Examples of native advertising are promoted tweets on twitter and radar and spotlight on tumblr. In both examples, the ad unit is the same atomic unit of content as the users create in the service. I think we will see more and more of this as the value of the impression is driven lower and lower in the programmatic model.

When you think about an advertising revenue model, you need to think about one of two things; scale or niche. Scale means hundreds of millions of impressions a month or more. Niche means a valuable audience that advertisers will pay a premium for. But even if you are going for the niche approach, you will still need to have a lot of impressions. Here is why:

Advertising is sold many ways, including:

[thanks to Darren for that list. I took it directly from his email to me]

With the possible exception of Sponsorship, all of these methods will converge to the same number. For example if you sell a click for $1/click, and one out of every hundred page views turns into a click then you are selling a page view for $1/100 (1 cent), and that turns into a $10 CPM (10/1000).

CPMs have been in decline for years on the Internet. That's because the Internet keeps on creating more and more inventory. There is no scarcity. And as a result the supply/demand clearing price just keeps going lower and lower. Ten years ago, a $10 CPM was acheivable. Today, you will be lucky to get a $1 CPM. A $1 CPM means that 10 million impressions will generate $10,000. That's enough revenue to sustain a one or possibly two person business but not much more. You will need at least 100 million impressions and ideally more than 1bn impressions per month to have an interesting advertising supported business at scale. 1bn impressions is a lot of users using your service a lot.

Niche will work at slightly less scale. If you have a unique and valuable audience, you might be able to get a $5 to $10 CPM. So you will need 100 million impressions per month instead of 1bn impressions. That's still a lot of super valuable users engaging a lot.

If you are going with a scale model and you have a service that has that level of inventory to sell, then you have the choice of building a sales force inside your company or using a third party to sell your inventory. You don't need just one third party. You can use many of them. That's where the Luma slide (above) comes into effect. There is an entire industry built to take the inventory you give to a third party and put it through endless machines and algorithms before it is shown to an end user. I will not get into this in more detail here but Darren's slide deck, which I linked to above, has some good information on that. When you use a third party to sell your advertising you can give away anywhere from 50% of ad revenue to 20% of ad revenue. Most commonly it is somewhere in between.

In the interest of keeping this post a reasonable length, I will end here. I highly recommend diving into the comments where we will discuss and debate this post. I will conclude by saying that an advertising model is a viable revenue model option if you are building a service that has a lot of scale. But if you don't have millions of users a month, you should think hard before going in this direction. There is a limited amount of ad dollars out there (except CPA budgets which are in theory infinite) and more and more services trying to tap into them every day which is why advertising rates on the Internet seem to be in permanent and systemic decline.