Commerce has to be the oldest business model. Sell something to someone. Or maybe it was barter back then. In any case, ecommerce revenues topped $200bn in the US in 2011 and are growing at close to 10% annually. Global ecommerce revenues are at least double that, maybe as much as $500bn depending on who you ask. So selling something to someone online is a big business and getting bigger.

Amazon is the world's largest online retailer. Amazon's revenues in the past four quarters were approximately $55bn. Clearly some of that revenue is non-retailing but let's assume their retailing revenues are about $50bn annually. They are roughly 10% of the global ecommerce market.

Retailing is a tough business. The difference between what you buy the product for at wholesale and sell it at retail is called your gross margin. Amazon's gross margin ranges between 20% and 25% depending on what time of year it is. The holiday quarter brings the lowest gross margins because retail makes up a larger perecent of revenues. At Amazon's size, a 25% gross margin turns into a lot of money. But a smaller online retailer can really struggle at these margins. Let's imagine a retailer of bicycles on the Internet does $50mm in revenues. That sounds great. But that means that only $10mm to $12mm a year actually stays in the business. The rest goes out to the bicycle manufacturers. And then the retailer has to pay for the website, the traffic acquisition, the staff to operate the business and a lot more. Pre-tax margins for online retailers will typically be in the sub 10% range, often less than 5%. To put that in context, the bicycle online retailer that generates $50mm in sales will keep a couple million pre-tax at the end of the year. It's a business for sure but not an easy one.

The reason that online retailing is so tough is that it is hard to differentiate one retailer from another. You want a new mountain bike? Go to Google and see what's out there. 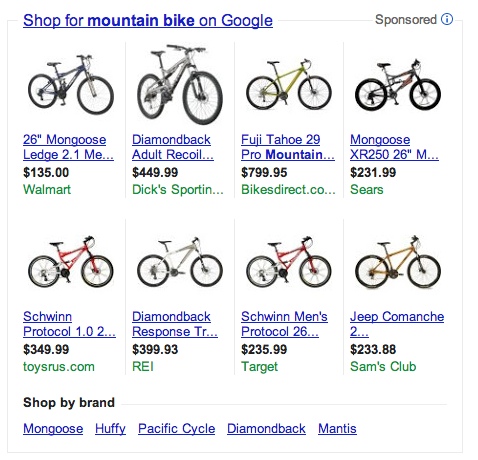 Retailing has always relied on location to provide some margin protection. There is no "location" on the Internet other than SEO. So gross margins online are going to be lower than they are in the real world. And on top of that, you have the capital outlays required to stock up on inventory and the markdown costs associated with getting out of unsold inventory. And then there are the shipping costs which increase the price to the customer unless you are willing to eat them.

I have never invested in online retailing. I don't like the economics of this business even though it is a huge market.

Beyond retailing, there are a number of other ways to do commerce on the Internet. The next is marketplaces. Marketplaces are places where buyers and sellers come together to transact. Marketplaces have always existed in the offline world. It turns out that the Internet is a terrific place to create marketplaces. And they have much better economics. There is no gross margin for the marketplace operator, just a transaction fee. There is no inventory. There are no shipping costs. All of those costs are born by the seller. I have invested in quite a few online marketplaces. I love the economics of these businesses. I plan to write an entire post in this series on peer to peer business models and marketplaces will be a large component of that post, so I will move on.

One way to get past the gross margin and differentiation problem on the Internet is to make all the goods you sell yourself. This is called "vertically integrated retailing" and it is a growing trend in online commerce. A great example of this model is Warby Parker which makes and sells a line of fashion eyeglasses. Warby Parker has no stores (at least they didn't when they started out). The Internet is their store. Vertically integtrated retailing has better economics because your products aren't commoditized by Google and the other search engines. Customers seeking your products must come to your website to purchase them. But these businesses have other issues. Building a brand is tough, particularly from a standing start. Manufacturing, most likely overseas, can be a challenge. The capital costs remain high because you still need to stock up on inventory. And you can face markdowns if your SKUs go out of style. Although I like this model much better than straight up retailing, I have never invested in this model either. The Gotham Gal has made a few investments in this sector though.

Another flavor of retailing is flash sales and daily deals. This is not a new concept on the Internet. There have always been clearance sales in the retailing world. But the Internet brings new tools to drive immediacy and rapid transactions. A french startup called Vente-Privee brought the concept of the flash sale to the Internet over ten years ago and it has been adopted widely across the globe, particularly in the past five years. Flash sales have better economics than traditional retailing. They are often acquiring the product at discounted prices. The inventory costs are lower because they blow out of the product quickly. And there is no competing for the buyer's loyalty on Google every day. Flash sales sites leverage mailing lists to bring their customers back again and again. The issue with flash sales is customer burn out. It is difficult to maintain a vibrant flash sale business over many years.

Auctions are another way to drive commerce online. eBay is the canonical company in this category. The nice thing about auctions is they leverage a set time frame to drive toward a clearing price. It is game of sorts and can be quite addicting and engaging. Auctions work particularly well in marketplaces where there are unique items to be bought and sold. eBay's gradual adoption of the "buy it now" model suggests that there are limits to the auciton model at scale and that consumers prefer a straight up retail model because of its simplicity. I suspect that auctions make up a substantially smaller percentage of online commerce revenues than they did ten years ago.

The revenue model hackpad includes a number of other forms of online commerce which I am not going to dive into in this post. If you have questions about any of them, I would be happy to take them in the comments.

In summary, commerce represents the largest and most common online revenue model. But it is not an easy one to execute profitably. It lends itself to commoditization and margin compression in most cases and the economies go to scale players like Amazon, eBay, and Walmart. While there has been substantial venture capital investment in this sector, particularly in recent years, it is not a sector that I like very much, other than marketplaces which to me are really peer to peer businesses. I will cover them more in a few weeks.