This post is for everyone who thinks venture capital is an easy business. I'd like to dispel that notion.

Here are short term and long term returns for the venture capital business over the past ten years compared to the public equity markets in the US. 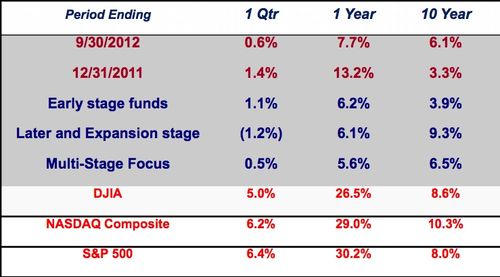 These numbers don't include the internet bubble of the late 90s, so they are just for the past ten years.

What jumps out at me is there are no venture capital returns in this set of numbers that break double digits. When I got into the business in the mid 80s, I was schooled that you needed to produce at least 20% annual returns net to the limited partners to stay in business.

The ten year comparisons to the public markets are also challenging. The NASDAQ Composite beats later and expansion stage funds and all the public indexes beat early and multi-stage funds.

This is Cambridge Associates data so it is based on many of the leading venture capital firms and it spans tech, biotech, cleantech and other areas. I believe this is a good representation of the overall performance of the VC business in the US.

Early stage investing is hard. You lose more than you win. And when you win, you need to win big. Later stage investing is a bit easier. You can pick winners in that business more easily. But so can everyone else. Each deal is an auction and the winner pays the highest price.

So the next time you are bidding one VC against another, maybe you can feel just a bit of empathy for us. We are in a tough business, trying to make a buck to live to fight another day. Just like everyone else.