Evidence On Our Smartphones

This line in the New York Times this morning is interesting:

investigators scrutinized scores of videos and photographs from surveillance cameras from nearby businesses, as well as from marathon spectators’ smartphones and television crews that were filming the Boston Marathon

It made me think of this image from the inaugural ball: 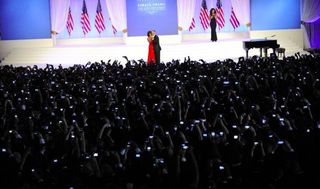 At any major event, people are going to have their smartphones out capturing the moment. They might be taking photos and posting them to social media, they might be taking videos and doing the same thing. Or the images and videos might just stay on their phones.

Who knows whether all this crowdsourced footage will prove to be useful to law enforcement professionals in the marathon bombing case. But the mere fact that footage from spectators smartphones has been collected points to its potential value.

It is also true that communities like Reddit and 4chan are attempting to do this work themselves. Maybe they will source some interesting images that the investigators can use. Maybe not. I don't get too upset about the potential for vigilantism here as I am not sure how they would all rise up and take justice into their own hands.

The rise of computers that we all carry with us everywhere, and their ability to capture what is going on around them, time stamp it, and geotag it, creates a ton of interesting opportunities. Including law enforcement opportunities. And I think that is a good thing.