Tenacity And Persistence Pays Off

Continuing the theme of case studies for MBA Mondays, I want to use a milestone that was passed last night to make a bigger point about startups.

I have known Scott Heiferman since the late 90s. He was one of the early NYC web 1.0 entrepreneurs. We were quite friendly with Scott but we were not early investors in Meetup, the company Scott started right after 9/11. Scott and I were at an event together and when asked about something he replied that he viewed Meetup as "a twenty year project." He said that it would take at least twenty years for Meetup to achieve all that he wanted from it and possibly a lot longer. And that he was patient and committed to that timeline.

As we left the event, I turned to my partner Brad and said "we should invest in Meetup, Scott is the kind of entrepreneur that we like and respect." And eventually we did invest in Meetup and we have been investors in Meetup for almost six years now.

When you are at something for a decade or more, it can become a slog. It requires tenacity and persistence to keep pushing and innovating. In the past year Meetup has started growing faster than it has in quite a while. The chart below shows that: 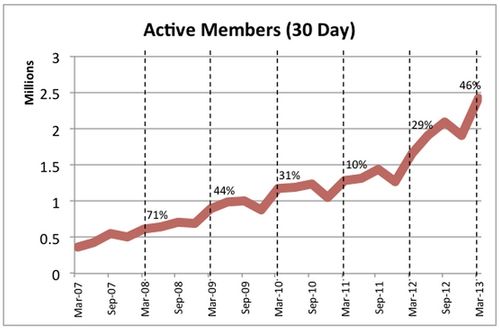 Scott and his team are as passionate about the Meetup mission as they were when they started the company. They have a very long timeframe in their minds and they are executing against it. And they are winning with tenacity and persistence. Which is why we backed Meetup in the first place. Well done Meetup.