I walked out of a meeting at 33rd and Park yesterday at 5:05pm. I had to be on a call in my home office at 5:30pm. Getting a cab is a bitch that time of day. The subway required a switch from the Lex to the L at Union Square and that can be tricky if you don't time it right. So I took out my phone, fired up the Citibike app, and saw that there was a Citibike station right across the street. Of course, if I didn't have my nose in my phone I could have figured that out by looking up.

I tweeted this out and hopped on the bike:

Getting on a @citibikenyc to get to my next meeting. twitter.com/fredwilson/sta…

Sixteen minutes later, I was home, and I tweeeted this:

This New Yorker cover says it all for me. Why do we get on the bike at the gym and then take a cab to work? 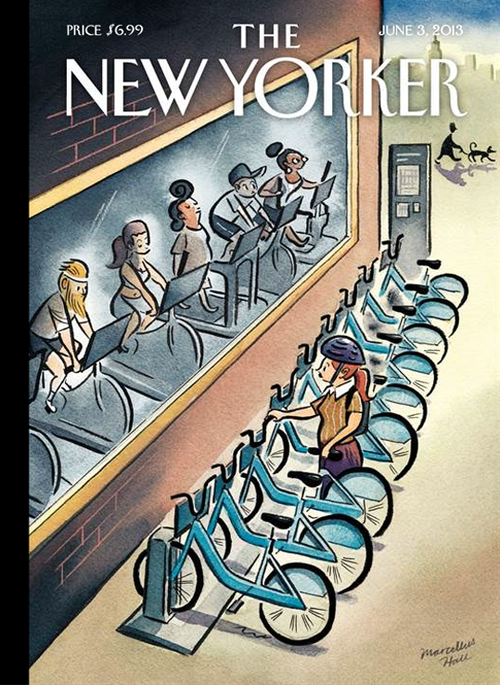 Sure there are some safety concerns. Helmets are a problem. I need an inflatable helmet in my pocket solution. I'll be looking for that. And cars and cabs and trucks can be dangerous company on the roads in NYC. But the bike lanes are huge in that regard. To me the bike lanes are the thing that makes Citibike work in NYC.

A few weeks ago, we bought our whole family annual Citibike passes. Eight dollars a month for unlimited rides per month. That's better transportation value than anything else in NYC and better for you too. Now I am off for my morning bike ride up the west side highway.

I love my city, my bike, and Citibike.