According to Google Analytics, these are the top social networks that bring people to AVC 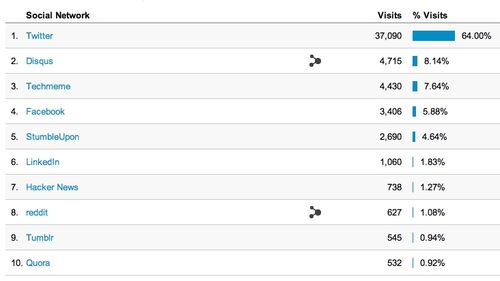 I've been tracking this for quite a while and not much has really changed over the years except that Disqus and Facebook have risen a lot in the past year and StumbleUpon has fallen a lot.

I think Disqus can drive even more traffic as they refine their discovery algorithms.

Video Of The Week: Jerry Colonna on ThisWeekIn

Back in 1996, at the very start of Flatiron Partners, Jerry Colonna, who started Flatiron with me, introduced me to Jason Calacanis. We hired Jason to do some due diligence for us on a potential investment in Geocities. That's how I met Jason. We went on to buy the first ad in Jason's magazine, Silicon Alley Reporter. Jason and Jerry tell that story at the start of this interview.

The really good stuff happens later on when Jerry gets talking about the emotional side of startups and entrepreneurship. This is another long one, 90mins, but if you can find the time to watch it, I think you'll get a lot out of it.

I recommend fast forwarding to 4:40 so you can avoid all the sponsorship stuff. If you can't watch the whole thing, I would suggest the part between 55mins and 1:05mins. You'll see Jerry in action.

No feature or fun friday today. I wanted to talk a bit about a feat that my friend Mark Suster has pulled off. He has completely repositioned and rebranded a 17 year old venture capital firm. And I think it is really impressive what he has pulled off.

I joined a 17 year old venture capital firm in 1987. It was run by the founding partners who were in their late 50s at the time. I was there for ten years and we struggled mightily to remain relevant with a brand that was, frankly, stuck in the seventies.

What I have not seen done well is to take an aging brand and inject new life, new positioning, and new meaning into it. And that is what Mark has done. They are now the biggest early stage VC in LA. Mark has one of the few must read blogs in the VC world. And they have a new name, Upfront Ventures. I love the name and what it means about how they want to behave and be seen in the world.

I am talking at the PreMoney conference today (via Skype) and I woke up thinking about the challenges facing the VC industry. I hope to talk a bit about this at the conference.

Some investors are ownership focused. They want to own 20% of the business but care less about the valuation. Let's take a hypothetical Series A round. An entrepreneur comes to USV and pitches us and we like what the company is doing and we offer $2mm at $8mm pre-money/$10mm post-money. The $2mm buys us 20%.

Another firm shows up, a firm that is less valuation oriented, and they offer $5mm for 20% of the business, which works out to $20mm pre/$25mm post. The entrepreneur suffers the same dilution but gets $3mm more to work with.

And the firm offering $5mm for 20% will likely have a $500mm fund size (or more) and will be making $10mm or more per year in management fees.

This happens all the time in the VC business. And it is why USV is committed to small fund sizes, small rounds, and smaller valuations. We lose a lot of deals to firms who aren't committed to any of those things. But that's life. We have made our LPs a fair bit of money and we expect to make them a lot more in the coming years. We keep the fees low and try to produce big gains. That's our model.

We are also very much focused on what is in the best interest of the entrepreneur. You might ask "how can taking $2mm for 20% be better than taking $5mm for 20%?" and you'd be right asking that question. The answer is you can get the other $3mm later at an even higher price. That has been the history of many of our investments.

We recommend that entrepreneurs keep the funding amounts small in the early rounds when the valuations are lower and then scale up the amounts in the later rounds when it is a lot more clear how money can create value and when the valuations will be higher. This model has worked out pretty well. David Karp raised $600k, then $4mm, then 5mm, then $25mm, then $80mm (or something like that). And at the time of the sale to Yahoo!, he owned a very nice stake in the business even though he had raised well north of $100mm. He did that by keeping his rounds small in the early days and only scaling them when he had to and the valuations offered were much higher.

It's important to understand all of this if you are an entrepreneur. Understand what your investors are optimizing for. Many are optimizing for putting a lot of money out so they can get to their next fund and raise even more. It's a big money game of asset allocation. When you team up with VCs who are playing that game, you are playing that game. There are VCs out there who play a different game. If you want to play that different game, please knock on our door.

Bitcoin has been stable for the past few months after its big spike and fall in early April:

Meanwhile Gold (yesterday's Bitcoin) is falling and has been for a few months:

That was a bit of a joke about "yesterday's bitcoin" and probably wishful thinking on my part but I can't help but think there is a bit of a sea change going on in investors minds out there.

On Monday afternoon, I attended the weekly Bitcoin meetup in "Satoshi Square" which is next to the Abe Lincoln statue in the north side of NYC's Union Square Park. Here's a photo of Charlie Shrem coming to greet me as I arrived. 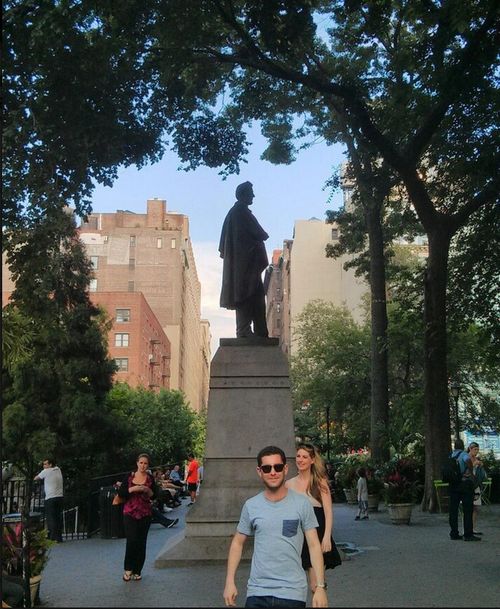 It is truly an "open air market". Folks were buying and selling Bitcoin for cash. You'd hand someone the cash and they would take out their phone and send you the Bitcoin in a mobile wallet to mobile wallet transaction. I also bought a Bitcoin t-shirt using Bitcoin sent from my mobile wallet. 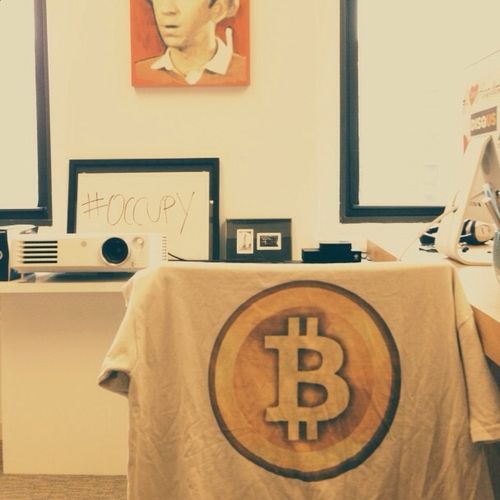 There is something real and tangible about an open air market where the only currency allowed is Bitcoin. I would encourage anyone who wants to learn more about Bitcoin to attend this meetup. It's every Monday from 5-7 pm at Abe Lincoln statue at the north end of Union Square Park.

It is still very early days for Bitcoin and digital currency in general but I like what I am seeing. I think this could be very real.

I blogged about this a couple weeks ago so this topic will be fresh in the minds of the AVC crowd. I am super excited about this.

There is a documentary about a chess team in the IS 318 middle school in Brooklyn. The film is called Brooklyn Castle and here's the trailer. Please take 2 1/2 mins to watch this right now.

I'd actually suggest taking an evening and watching the movie. You can stream it on Netflix.

So here's the deal. This chess program at IS 318 takes three big trips a year to state and national tournaments, they have a full time faculty advisor, they study at the Marshall Chess Club, and they have a bunch of training materials they use every year. It's an expensive operation but it produces results. They are the NY Yankees of middle school chess teams. They turn kids from the streets of NYC into chess masters. And I do not think you can put a price on that.

The program was at one time funded by the school system. But budget cuts in the past five years have cut away that funding and the program has been kept alive in recent years by the generosity of a few big donors.

I saw the movie and read about the cuts and thought "this is what crowdfunding was made for" and through my friend Maureen contacted John Galvin, the Assistant Principal of IS 318 and a central figure in the film. I suggested to John that we do a DonorsChoose project to crowdfund Brooklyn Castle. He agreed, and so we went to the awesome DonorsChoose team who got to work and got the project up at the end of last week.

The project page is live here. It outlines exactly what we are funding. DonorsChoose's systems and processes make sure that the funds we raise will go to exactly these things. That is one of the many awesome things about DonorsChoose.

The Gotham Gal and I are doing a match for the first $10,000 of donations that come from the AVC community. If you want us to match your donation, please use this link to make it.

No MBA Mondays today. I'm obsessed about something else this morning.

Benedict Evans has a series of blog posts up showcasing twitter data from a company called MapBox. 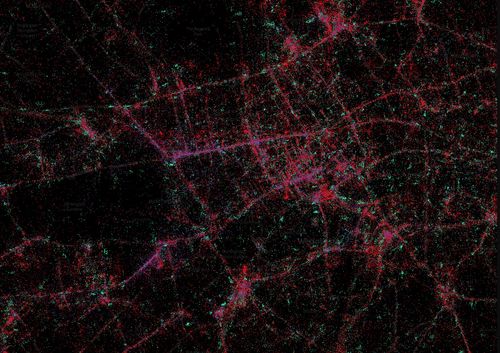 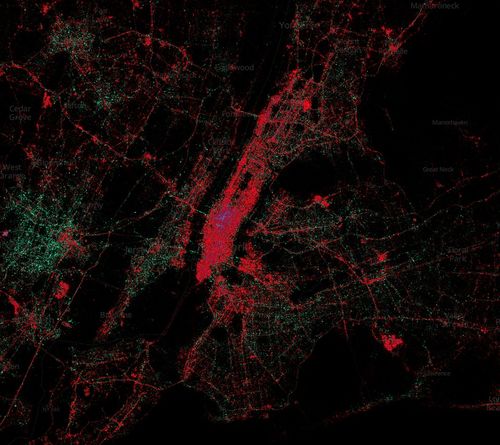 You can click on those images to blow them up and see them better.

the iPhone is more expensive than most of the phones on the market, and this shapes the kind of people who buy it

The iPhone has locked up the top end of the market for sure. The rest of the world is on Android (and Blackberry and Windows to a lesser degree). Developers of mobile apps need to keep this in mind when they choose which platforms to develop for.

That's often the refrain when I advocate for our portfolio company DuckDuckGo. Most people think Google does a fine job (they do) and don't feel the need for a private search engine.

But in the past few weeks, it has become clear to some that private means private from everyone, including the government. If a National Security Letter shows up at DuckDuckGo, there won't be anything to hand over to the Feds because DuckDuckGo does not save search behavior on its users.

That's a big deal, as evidenced by their traffic surge over the past few weeks: 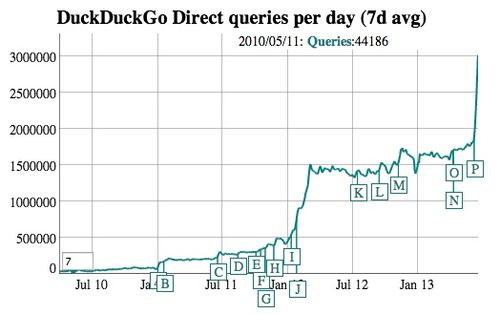 If you would like to change the default search engine in your browser to DuckDuckGo, you can do that here.

Video Of The Week: My talk with Sarah Lacy

We've already been discussing some of the things that I said in this talk, but here's the whole thing.

It's long, ~90mins, but we covered a lot of ground and if you have some time this weekend, it might be worth putting on the big screen and letting it run while you drink coffee, read, or clean the house 🙂

The idea for today's fun friday comes from Tyrone who wrote this in an email to me this week:

For me, the answer is the NBA playoffs (though the result bums me out), This Is The End (the jonah hill exorcism is hysterical), and my favorite records of the year so far are Lysandre, Modern Vampires Of The City, Random Access Memories, Mala, and Isles.

What are your favorite entertainment moments of the year so far?