I wrote about drones a while back and as part of my exploration of them, I bought an AR Drone on Amazon. It was shipped to my office for some reason and sat there for about a month as I normally cycle or scooter home. But yesterday I decided to Hailo it home and bring the drone home with me.

It was good timing as all of our kids are home this week and got to participate in the maiden voyage. Emily and I unboxed it and charged the battery. Then we took it for its maiden voyage in the living room of our apartment.

Josh did the flying bit on my android phone, Emily and Jessica did the Instagraming and Vining, and I played prevent defense so that the drone would not hit our Eric Freeman painting. 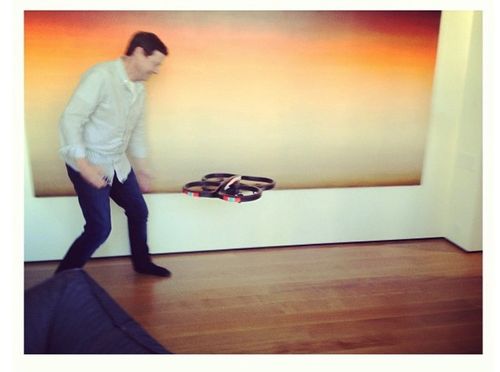 After witnessing this scene, the Gotham Gal immediately banned all drone flying in the apartment so we will have to continue our exploration in the back yard.

Here are some thoughts based on the out of the box experience and maiden voyage:

1) the out of the box experience is great. It basically comes all put together, you charge the battery, download the app (iOS and Android) onto your phone or tablet and you are good to go.

2) it conects via wifi not bluetooth. That works fine but while you are flying the drone, you are not online. That seems like an issue at some level for cool things you might want to do with it that leverage the internet.

3) the app that controls the drone and the interface was not particularly intuitive. Josh plays enough video games that he is probably a candidate for the air force drone academy and yet he had some difficulty figuring it out.

4) everyone loves the drone. It would make a great house pet.

Once I get the hang of flying the drone, I want to start programming it. I plan to continue to post updates here as I get more into this.