I've written a fair bit about the fact that I think we will use our mobile devices (phones, tablets, watches, glasses, etc) to control the more expensive devices in our lives (TVs, car dashboards, refridgerators, etc). I think this mode of user interaction will win out over software solutions built for and running on the more expensive and therefore longer lasting devices we own.

Until now, Apple's Airplay and Bluetooth were the only good solutions for this kind of interaction. I use both in my home and office and I use them every day. But, as I have written here before, both have issues. Airplay is proprietary and not available on all devices (Sonos being a prime example). And Bluetooth is old and doesn't scale well into high bandwidth applications.

I've tried DLNA which Google and others have supported and its wonky right now. It's possible that DLNA will evolve and emerge as another good alternative.

But yesterday Google announced Chromecast which is an interesting take on this approach. Chromecast is a HDMI dongle that you put into the HDMI port of your TV and then connect to your home wifi network. 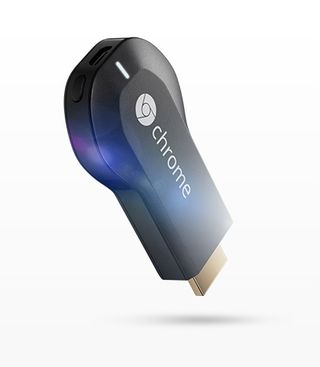 I've just purchased four of them from the Google Play store. I will put them on all the TVs I've got in my homes and see how they work. We use Nexus 7s to control the TVs in our homes and so those Nexus 7s will now be able to do a lot more than switch inputs. They will be able to be the input.

It's too soon for me to know how big of a deal Chromecast will be. I need to get my hands on it, use it, and then I will have a better feel for it.

But this much I know. This commenter on Hacker News is spot on:

people should just think of TV's the way they think of their jamboxes: a higher fidelity dumb pipe for their existing content