So the Brooklyn Castle Crowdfunding campaign is over. Here is the project page that outlines what happened. If you don't want to click on that, a total of $67,784.99 was raised from 308 donors. Of that total, $57,617.24 went to IS 318 to fund their chess team. $10,167.75 went to DonorsChoose to support their classroom project crowdfunding platform.

The AVC community was a huge part of this. We provided the early funding that gets a project off the ground at DonorsChoose. We contributed $13,166 of the total and that came from 127 of you. I want to thank each and every one of you who gave. It means a lot to me and to the folks at DonorsChoose that the AVC community is so supportive of projects that I highlight here.

I promised a $10,000 match from the Gotham Gal and myself that never got contributed to this project. It was funded in its entirety without the help of that match. So we are going to contribute that $10k to another DonorsChoose chess project. It will either be next year's IS 318 campaign or possibly other NYC public school chess team projects. I will work that out with the DonorsChoose folks over the next few days. But rest assured that we are going to come up with that $10k as promised.

I'd like everyone to consider exactly what happened here. My friend Maureen pointed me to a blog post. I went and read it and thought, "there has to be a way to get this program funded." I got the assitant principal John Galvin's name from Maureen and emailed him. He agreed to do a DonorsChoose campaign. And then we and others got behind it. Now his kids have the funds to keep playing chess and winning tournaments and learning valuable life skills.

All of this happened on the Internet. I've never met John Galvin or any of his chess players. I've seen the movie though. That certainly helped a lot. If you havent' seen the movie, you really should. It's on Netflix (ie on the Internet). This global interconnected network that a couple billion people are on every day is a big deal and can be used to solve all sorts of problems. We just witnessed that. It feels good.

Update: John Galvin sent me this photo this morning. It is for all of you from the kids. 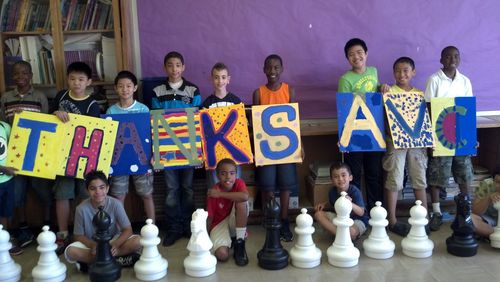