Can't do feature friday this week because Arnold suggested a great fun friday for tomorrow. So we will do feature thursday instead.

I got an update of the Android YouTube app this week and when I launched it, the home screen looked like this: 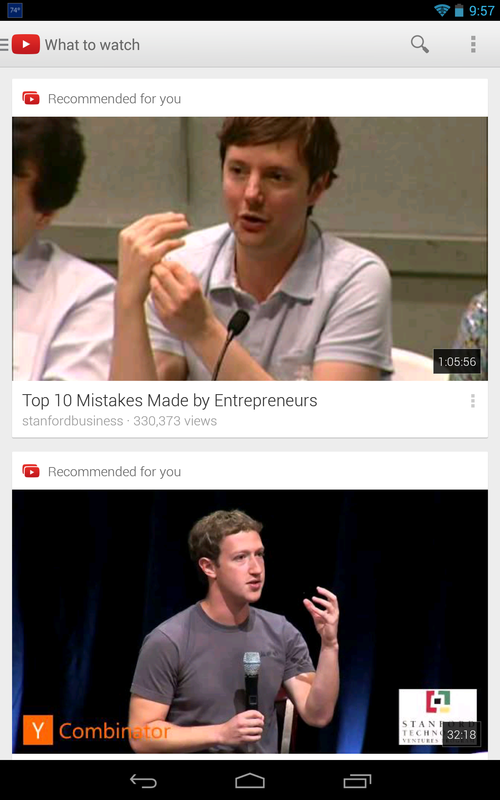 That is just the first two videos of the "what to watch" feed but you can scroll forever and the recommendations are awesome. After Matt Cohler and Mark Zuckerberg, I got the top 10 Knicks plays of the 2012-2013 season, an Arctic Monkeys video, and a video about a 3D printed prefab house.

This is like the #discover tab on Twitter but for video. It's awesome and I've added the YouTube app on my Nexus7 to my daily content consumption flow now. I don't watch every video, but I watch a bunch of them. I think this is a killer feature.

Strangely enough I don't get the same recommendations when I visit YouTube on the web. I get recommendations but they aren't as good. I wonder if they've rolled out something new on mobile first and will bring it to the web shortly.

I spent some time a few months ago setting up some subscriptions in YouTube and that is certainly a big reason for why the recommendations for me are so good. I would recommend doing that as well.

In any case, if you haven't checked out the new YouTube app and the "what to watch" feature, I strongly suggest giving it a whirl.