This past fun friday was a big success. We found out that roughly half of the folks who answered the poll blog.

I don't know if that is a representative sample (~1,000 answers out of ~5,500 visits on friday), but it is clear that a lot of the people who read AVC blog, at least sometimes.

We also collected a large number of blogs on our hackpad. The hackpad was getting a bit messed up and so I cleaned it up and locked it down. Any additional entries to the hackpad will need to come through me as moderator. That will make sure it remains in good shape going forward.

Finally, Sebastian Wain created an OPML file out of the hackpad. It is available here. I imported it into a blank Feedly account and the result is something like 230 blogs: 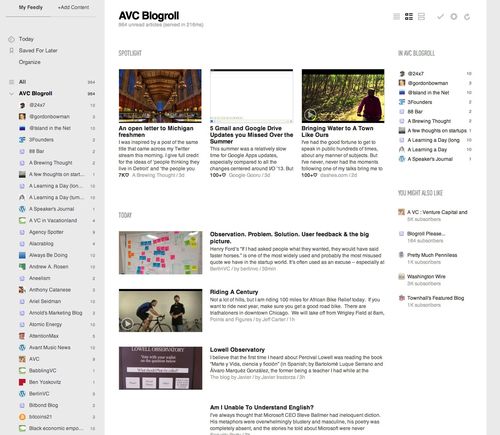 In any case, this has been a great exercise that surfaced a lot of great voices out there. We've known many of them as commenters at AVC. But they also have blogs and now we've got an easy way to read them. I'd like to thank Arnold, whose idea this was, and Sebastian, who completed the final piece of this. Well done.