When I got back to my office after some time at the beach I found a GeeksPhone waiting for me. Regular readers will remember that I have been eager to try an all HTML phone. The best option right now is Firefox OS and this GeeksPhone is the first Firefox OS phone I have gotten my hands on. I could barely pay attention to anything else in the office yesterday. All I wanted to do was play with this thing.

This post is all about my first impressions. I won’t focus too much on the hardware since there will be a number of handsets made that run Firefox OS. Instead I will focus on the experience of using an all HTML phone.

I’ll give you the punch line and then work backwards from there. If I had to use this phone because I could not get my hands on something else, I could make it work for me. But there are a bunch of compromises required to use an all HTML phone and at this point, they aren’t worth it for me. Of course, I could have predicted that and so could all of you. But it is one thing to imagine the experience and another to have it first hand.

That said, here’s a tour of the experience. I apologize in advance for some of the photos. I needed to shoot at an angle to avoid the glare of the lights but that caused the screen to show hand marks. I went back and reshot some of the photos but not all of them.

Like Android and iOS, you get a home screen with apps on it. The things is the “apps” are just bookmarks to mobile web apps. 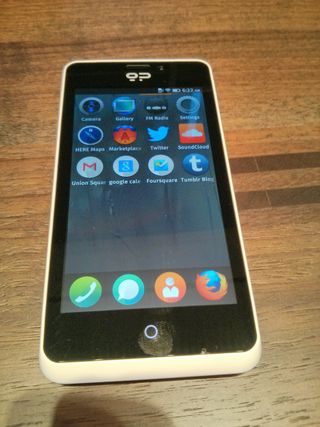 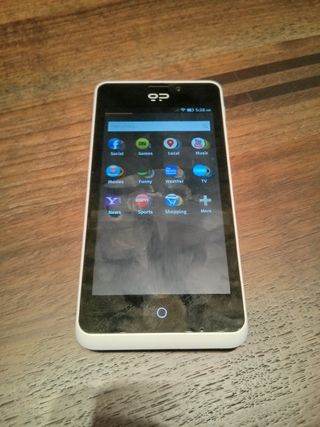 Here’s a look at the “social” category 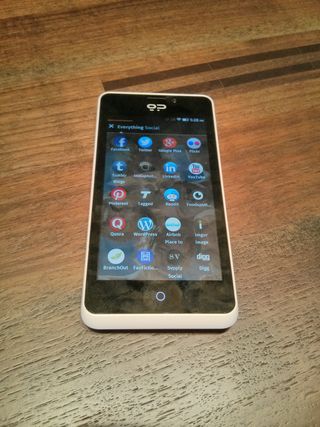 I went into the marketplace and two of the most popular apps were Twitter and SoundCloud (!!!!!). So I added them. 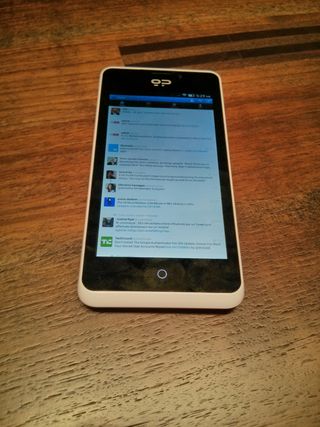 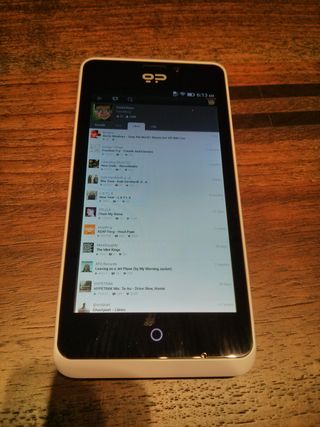 I am not surprised that Twitter and SoundCloud were the two of the most popular apps (along with Wikipedia and Solitaire). They have invested a lot in their mobile web experience and it shows. Both apps work great on the GeeksPhone although the default font size on all the apps is about 2-3 points below what is legible to my old eyes (with glasses on).

The default maps app that comes preloaded on Firefox OS is called HERE.  It looks like this. 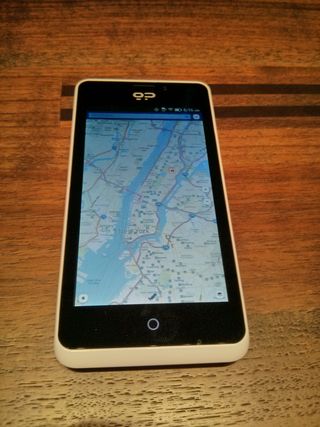 Needless to say I have added Google Maps to my home screen since taking these photos. It is much superior to the HERE maps.

My biggest disappointment was email. Gmail sucks on Firefox OS. First of all, I can’t figure out how to get to my priority inbox on the Gmail app in Firefox OS. And the too small font size problem really makes email impossible. And for some reason I keep crashing the Gmail web app on Firefox OS. 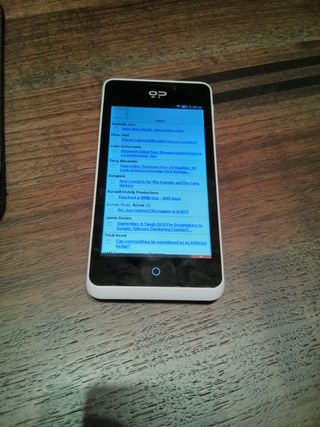 The Google calendar app works a lot better. I decided not to take a photo of that because it reveals all of my meetings today which I did not want to do. 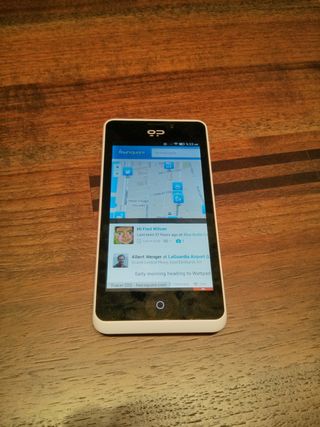 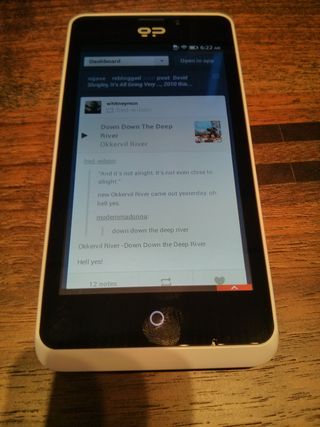 I did not try the camera out because it requires a memory card and one does not come with the phone. I didn’t have one handy in my work or home office. There are front and back cameras, 8mp on the back, 2mp on the front.

I also did not try out the phone because I did not have a mini sim handy. I suspect it makes calls and texts just fine.

I find the keyboard a bit difficult to use. It is a bit smaller than the android keyboard I use and it is not as responsive as I am used to. I find myself making a lot more typing errors on the Firefox OS phone.

The audio experience is fine. I am listening to music on the Tumblr app right now on the GeeksPhone, something that works really well in Tumblr’s mobile web app but sucks in their native mobile app. And as I said before SoundCloud really shines on this phone.

So who would this phone work well for right now? I suspect anyone who does a lot of texting but very little email would find this phone a decent option. Web apps that have great mobile web versions (Twitter, SoundCloud, Foursquare, Tumblr, etc) really do great on this phone. So maybe a teenager or student who needs an inexpensive smartphone but doesn’t need a ton of productivity apps could make this work.

But I can’t. I really wish I could. The three wishes I have for Firefox OS are; bigger default font size, better keyboard, and get Google to build killer mobile web apps for this phone. If you do that, I will come back and give it another shot. I am so rooting for you.

UPDATE: The team at Sketchfab sent me this 3D embed for the GeeksPhone. It’s cool so I am adding it to this post