Two weeks ago, in a fun friday that many derided as "no fun" we established that a minority of this community, but a sizeable one, thought that the US would default in its debt obligations as a result of an inability to find common ground in the latest budget fight. 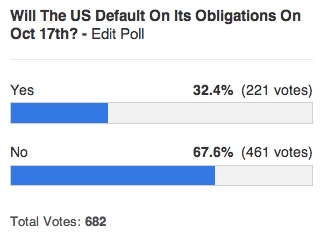 I would like to redo that poll to see where the community has come in the past two weeks, most of which has been during the government shutdown (a misnomer if there ever was one as most of the government is still operating) and a political showdown in Washington. So here is the same question, slightly reworded:

My view is that we are not going to default on our obligations this year and I voted that way.

The emergence of the Ryan plan (and Paul Ryan) strikes me as exactly what we need to get ourselves out of this mess. I would like to see Obama engage in serious negotiations to further cut the deficit by attacking Medicare and Medigap spending and I would like to see the GOP agree to modest revenue increases to go along with those cuts.

We've made a lot of progress over the course of the Obama administration in reducing the god awful deficits that the Bush Administration and the Stimulus Plan left us with. Obama may have been brought to all of these budgetary moves kicking and screaming by his Republican opposition, but we have gotten them done. And it looks like we might get even more now.

The way this is going, we might have a balanced budget by the end of the Obama administration. Who would have thought that Obama's twin legacies would be a health care system where everyone is covered and a balanced budget. Truth is always stranger than fiction it seems.