Here are some stats for AVC over the past month: 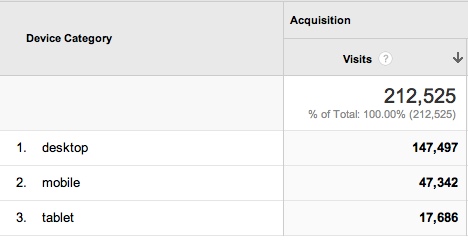 I was surprised that desktop remains so strong. I think my usage of the web is 40% desktop, 40% phone, 20% tablet. But I guess I am out and about a lot more than many people who are office bound during the day.

These numbers are up slightly this year. I ran the same numbers for the 2013 year to date and desktop was ~75% so it is moving down steadily, but not dramatically.

For those who want to know iOS vs Android, mobile visits are about 75% iOS, 25% Android. Not surprising considering who reads this blog.