What Are People Doing On All Those Cheap Tablets?

I saw this chart on our favorite analyst's blog this morning: 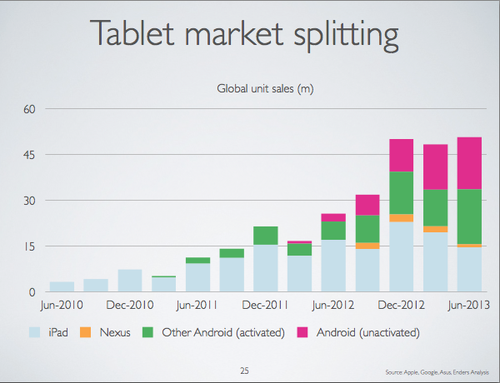 And I thought "that's a shitload of cheap android tablets." 30mm cheap Android tablets in the first six months of 2013?

And of course Benedict was asking the same question I was thinking:

Why are people buying these? What are they being used for? They're mostly in China (that’s the pink bar above) and emerging markets and in lower income groups in the west. And it seems that they're being used for a little bit of web, and a  bit of free gaming. Perhaps some book reading. And a LOT of video consumption. In fact, one might argue that for many buyers, these compete with TVs, not iPads, Nexuses and Tabs. But regardless of what they’re being used for, they’re not being used the way iPads are used. In effect, they are the featurephones of tablets.

But clearly most folks like me use the iPad. The people who are buying the cheap Androids are using it for something very different.

But how long will that last? I was at a school the other day. The school had laptop carts full of macbooks and the Principal was talking about getting iPad Minis for the kids. I suggested laptop carts of Chromebooks and Nexus tablets instead. It will save the school hundreds of thousands of dollars.

Education, Healthcare, etc, etc. These industries need commodity mobile devices but in volume price matters a lot. I think cheap Android tablets have a lot of room to grow and the use cases will widen and this chart will change. At least that's my bet.