Arnold suggested we discuss these ads last week so we are going to do that. But first some background.

Disqus, which is a USV portfolio company, offers a free ad-supported service for both commenters and publishers. Their first ad product is promoted discovery which has been a link oriented product for the past year. Publishers opt into promoted discovery and share revenues with Disqus if they opt-in.

Recently, Disqus added the option for publishers who are running promoted discovery to switch from links to thumbnails. I decided to make that switch and turned on thumbnails a week or two ago. The revenue AVC is making has gone up as a result. I use that revenue to buy promoted discovery from Disqus, thereby bringing more readers and community members to AVC. 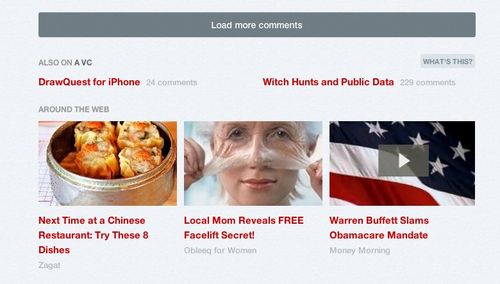 Promoted discovery is not the only ad product that Disqus is likely to rolll out. It was rolled out first because these kinds of ads are common on blogs and online publications and advertisers are used to them and they are relatively easy to sell. Over time, I expect Disqus to come up with more native advertising models.

But for now, these are the only ads running on AVC. I am curious what folks think of them. If the community really dislikes them, I can easily turn off thumbnails and go back to links. The only cost to me is less promoted discovery for AVC running on the Disqus network.

So, what do we all think of the thumbnail ads?