Every morning I post a song to the Internet. I have been doing this for at least six years. For as long as I've been on Tumblr.

You all know how obsessed I am about posting every day. It's probably a mortality thing for me. Wake up, be glad to be alive, post something on the Internet. Like a dog marking his spot.

Posting music is a bit different than posting text. Because you can listen to it. It comes alive. It makes you smile, dance, tap, and at times, cry. I cried a fair bit last week as Lou Reed songs filled up my feed for a couple days. We sat shiva with his music.

Friday is particularly special because a group of us have played a game called cover friday for something like five years now. The group is loose. Anyone can join by simply posting a cover song on friday morning. But participating requires committment. Because you have to post a cover song to your Tumblr every friday morning. This is what my Tumblr looked like this morning. 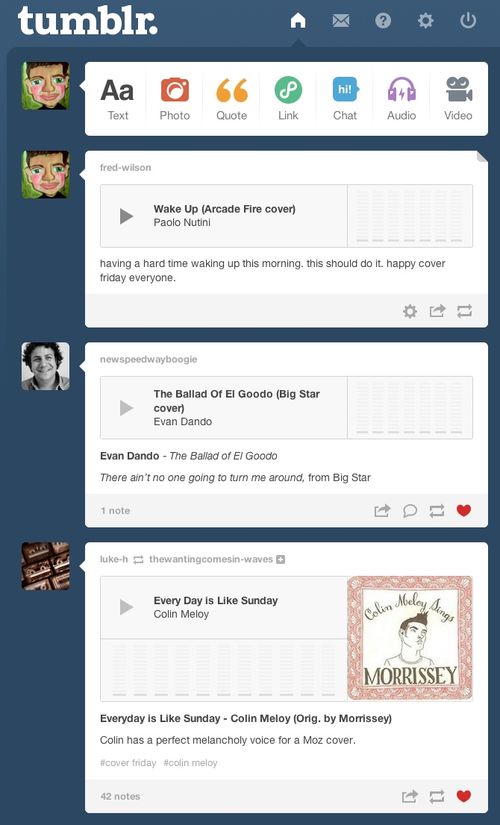 Posting music used to mean finding a mp3 and uploading it. I never do that anymore. I post three ways. I find songs on soundcloud and embed them, I find music posts on Tumblr and reblog them, and I find mp3s on the web and post the links. Search and reblog is all it takes. I think pretty much every song in the world is somewhere online. At least that's been my experience for a long time now.

You can also do this with YouTube. Pretty much every song is on YouTube as well. But I don't like the video. I find it distracting. I just want the music. So I don't post YouTube music and don't watch much of it either.

Posting and streaming music has changed music discovery for me. I like to post so others can discover. And I like to follow people who post music so I can discover from them. I've made a bunch of great friends this way. Some of whom I've never met in person. But they light up my feed with music. Which is one of the best things a friend can do for a friend.

Here's my cover song for today: