One of my favorite features of Gmail is the ability to get a file (.xls, .doc, .ppt, .pdf, etc, etc) and have the option to open that file in Google Drive. It is that single feature that allowed me several years ago to remove all desktop software from my machines and use only cloud based software.

However, recently Google changed the way that feature works and I can’t figure out how to (or even it is possible) revert back to the old way.

Now, Google offers two choices, download or “save to drive”, as shown below 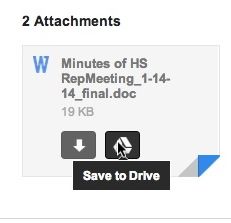 You might say that’s not a big deal. Two clicks instead of one. But it is a bit more than that. First it seems to me that it takes longer to go through the new save/open flow than it used to take to just open. Second, I really don’t want to clutter up my Drive with all of these attachments that mostly I just want to read. If I do want to save them, I could always have done that in the old flow after opening the attachment.

I suppose this is all part of Google’s desire to have you save everything so you can search for it later. I appreciate that to some extent, but there is so much that I just want to view and delete, emails, attachments, and many other things. Google is making it harder to do that and I don’t really appreciate that.

If anyone knows if it is possible to go back to the old flow, I would love to hear how.