On thursday, I stopped by usv.com and saw this post:

I clicked on the link and it took me here. Turns out Asish Datta of Setfive Consultingmade a word cloud using the raw words on AVC since launch in 2003. For 2013, the word cloud looks like this: 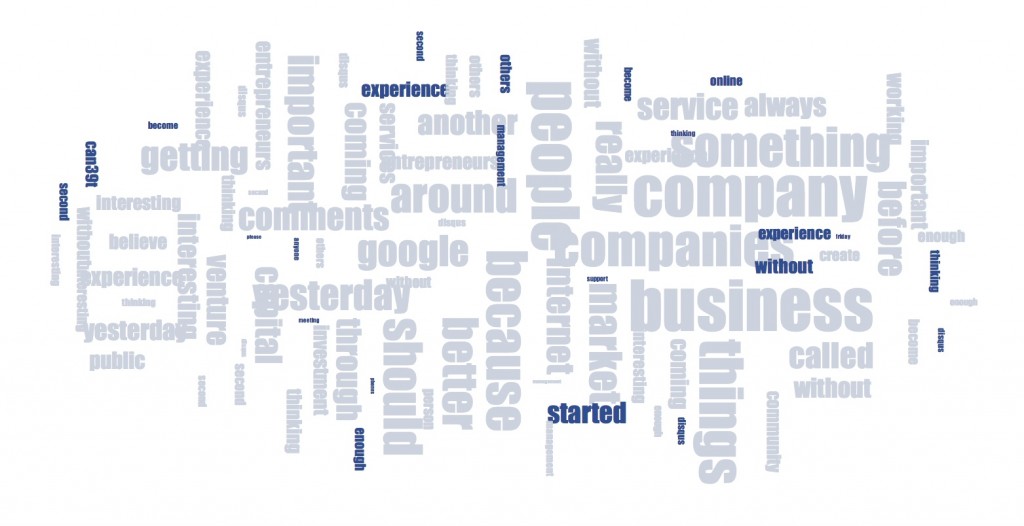 The dark blue are words that did not appear in the top 100 the year before. You can see word clouds for all eleven years of AVC here.

But possibly more interesting than the word clouds is the table below the word clouds that lists the roughly top 300 words over those eleven years and the years they were popular and when they were not. You can see that here.

As my partner Brad pointed out at usv.com, words like company, investing, business, etc are not particularly interessting or revealing. But there is a lot of signal below that noise. One way to see it is to look at just the company names in the table and see when they were on my mind and when they were not. Only Google and Twitter have managed to make it in the top 100 every year they and AVC were around, for example.

Asish (or someone else as he’s open sourced the code and data here) could do some additional work on this and come up with some pretty interesting observations. I would like to thank Asish for this great work and in particular for open sourcing it so others can work on it if they would like. That’s awesome.