I touched on the concept of App Constellations in my post on Friday about Swarm. I’ve been thinking about this concept for the past week and I think its an important development in the world of non-game native mobile applications.

If you made a list of all the non-game mobile apps that have more than 10mm MAUs, it would be a pretty short list. It probably would not look much different than the top 100 or 150 free apps in the iOS and Android app stores without all the games. In a leaderboard driven world, the big get bigger and everyone else goes home. We’ve discussed this phenomenon many times on AVC, most recently here.

Early last week my colleague Brian showed me the home screen of his iPhone. 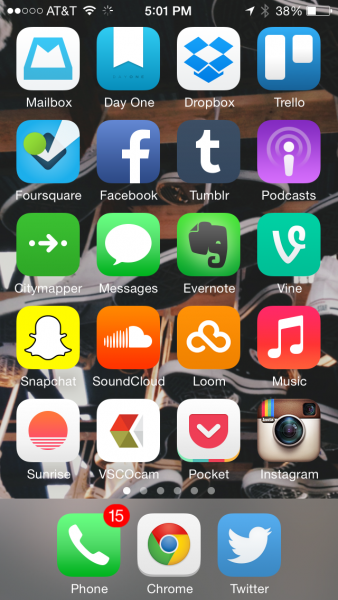 He pointed out to me that he had three Dropbox apps on his home screen – Dropbox, Mailbox, and Loom. He said he could imagine a world in which his entire home screen was populated by apps from a few of the top companies.

So that got me thinking. Not only do we have a rich get richer dynamic in mobile apps, but we also are witnessing a maturing market consolidating. The big mobile app companies, Google, Facebook, Dropbox, Twitter, Yahoo!, and most recently, if you believe the rumors, Apple, are acquiring the leading mobile apps, further concentrating the list of companies that have apps on the leaderboards and apps on our home screens.

And we are seeing increased use of deep linking app to app among the apps in the same constellation. It is increasingly possible to do deep linking app to app between apps that are not part of a single constellation. Facebook and Twitter are making it easier for third party developers to take advantage of deep links in their apps to do this. But when you control a constellation of apps, it is much easier to make deep linking from app to app a standard across all of your apps. This is a very big deal because it creates a web like experience on mobile and the fluidity of that experience is very engaging, further drawing users in.

These app constellations are possibly the only sustainable answer to solving the distribution conundrum in mobile – how do I get around the app store leaderboard traffic jam? If you own a leading constellation, you can use your apps and your relationship with the users of those apps to promote and distribute new apps that you either build or buy. This promotion is “in situ” right on the mobile phone where the consumer’s attention is increasingly placed. I see this as yet another “rich get richer” dynamic in the mobile ecosystem.

It is interesting to contrast all of this to what happened in the last downloadable software phase in tech – PCs and PC Software. In that world, Microsoft’s Windows OS became totally dominant and led to a dominant application monopoly (Outlook, Excel, Word, Powerpoint, etc). In native mobile, we have a duopoly with iOS and Android and what looks like at least six App Constellations (Google, Apple, Facebook, Twitter, Yahoo!, Dropbox). There may be some other important constellations emerging. I would love some suggestions of other ones in the comments (Foursquare?).

Here’s my home screen. Other than my total and complete capitulation to Google, my phone isn’t yet a collection of app constellations – other than the USV constellation 🙂

But I think it is likely headed there along with all of your phones. 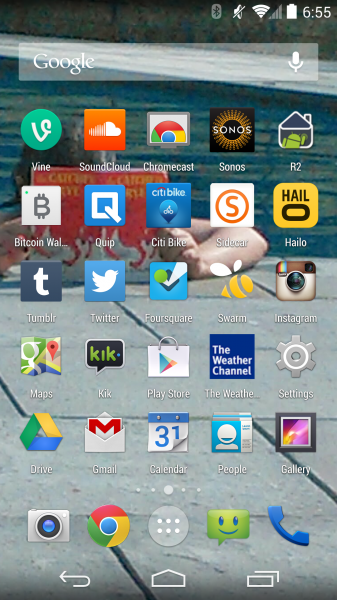