Be Nice Or Leave

We have a sign like this in our beach house. We got it in New Orleans many years ago. 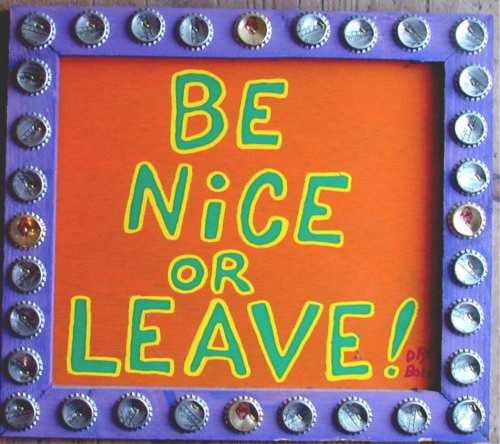 I thought of that sign when I was on the phone yesterday. I was talking to a person involved in a deal I’m working on right now. He said “you guys are being awfully nice here.”

For much of the rest of the day, I was thinking “are we being too nice?”

We learned from The Godfather that “it’s not personal, it’s business.” We know that some of the most successful entrepreneurs in tech have been difficult individuals who did what they had to do to get ahead.

We know that a lot of investors, VCs included, will do what is required to make a buck.

So its conventional wisdom that being nice is a bad idea in business.

I am not saying you should be overly generous or nice to a fault. There’s a limit to everything. But I do think that thinking about others, and trying to make things right for everyone (which is impossible and will drive you crazy) is an approach that pays off in business.

It’s not the fastest way to make a buck. It takes time. But it is way more sustainable than screwing people over.