Since the very beginning of Twitter, users have wanted to take tweets from their timeline and tweet them out to their followers. Initially it was just users copying the original tweet and pasting it into the tweet box. Quickly the user convention became to put the initials RT in front of the pasted text. And the retweet was born. Birthed by the users like many of the best things about Twitter.

When I showed up at Twitter in the summer of 2007, there was a debate about how to productize retweets. Some wanted retweets to be hard coded so that the only thing that got retweeted was the original text. Others wanted to continue to allow users to mark up the tweet while retweeting it. The argument in support of the hard coded retweet was that would treat the original tweet as the atomic unit and retweets could be tracked as a signal of super valuable and popular content. The argument in favor of the marked up retweet was that users wanted to editorialize with stuff like “this is awesome” and such.

The timeline is blurry to me, as is so much about those early years at Twitter. But I think that debate raged on and was not resolved until Ev took over as CEO. It is my recollection, although I could be wrong about this, that one of the first product changes that happened under Ev’s leadership was the hard coded retweet was launched and this button started appearing underneath tweets in your timeline.

Users could still cut and paste and manually retweet but if they wanted it to be counted as a retweet, you had to use the retweet button which did not allow manual editing. Like all product changes at Twitter, that created a fury of outrage from the users. But Twitter stayed the course and the productized retweet has become an enormous success.

At some point, clicking on the retweet button started to support the idea of adding some text to it. I can’t really recall when that change happened.

I started seeing embedded tweets in my timeline yesterday. My favorite was this one from Dick Costolo:

NBA adds their Twitter handle @NBA to the game ball for the 2014-2015 season. #NBAGameBall https://t.co/bBlQ9lsmxm 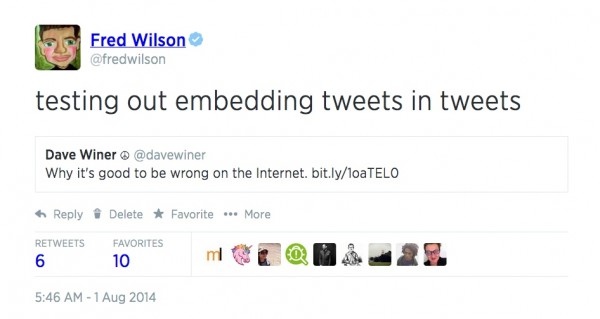 So Twitter isn’t finished completing this feature. This blog post will suffice as a feature request to Daniel and the product team to do that.

But I’m quite excited about this feature. Sometimes you don’t want to do a hard coded retweet. You want to editorialize the tweet. This is a very elegant way to support that. Well done Twitter.