Last week I wrote the Dentist Office Software Story and the top comment on that post was this from LIAD:

….along comes Sevin Kystrom, he only cares about looking at photos of teeth. he unbundles photos from denstry.com by creating a standalone app called teethagram. users love it. he sells it back to dentistry.com for $1bn

I kind of flipped out when I saw that comment because it describes our most recent investment, Figure1, which my partner Andy blogged about at usv.com yesterday. We had closed but had not yet announced the Figure1 investment when LIAD made that comment.

Figure1 is “instagram for doctors.” It’s not for dentists, as LIAD’s fictional company teethagram is, but other than that, and the sale for $1bn, the story is pretty much the same.

We have believed that simple, easy to use, photo centric apps on mobile have the potential to become very large businesses for a host of reasons. First and foremost, as Brian Watson taught me, photos are the atomic unit of mobile. It’s easier to snap a photo and post it/send it, than it is to do anything else, including write something. And, as the old adage explains, a picture tells a thousand words.

A doctor can say “I’ve got a patient with a very rapid A-fib” or she can send this to her colleagues: 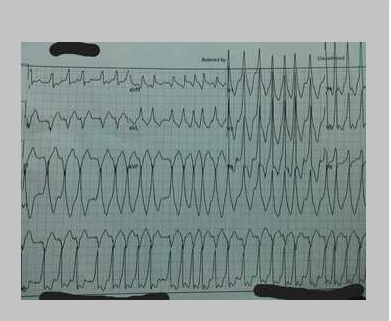 There’s a hell of a lot more info in that EKG than a doctor could type into a text message or email.

But the even better thing is the conversations that instantly develop around these images, like this one:

I think it’s rapid a-fib. I think the ischemic changes are due to the rate. Give them some #Amiodarone and see what happens when the rate sloes down.

Instagram is a powerful product. And most people know how to use it and the value of the interactions around photos that it produces. Like our portfolio company Edmodo, which took the Facebook UI and applied it to teachers and students in K-12 education, Figure1 takes a popular and effective UI and applies it to an industry in desperate need of change.

I’m super excited about the value Figure1 provides to doctors and their patients and I am really pleased that the Figure1 team agreed to work with USV as they build their business.