The New York Times has a post on Trolls and Trolling today. It cites an academic named Whitney Phillips who has written a book about Trolls.

Whitney says “As long as the Internet keeps operating according to a click-based economy, trolls will maybe not win, but they will always be present.”

We’ve had our fair share of Trolls here at AVC over the years. They are most notable whenever I write something negative about Apple.

But we also get them on posts that are more personal in nature.

Yesterday I got a Kik from William who helps me moderate AVC. 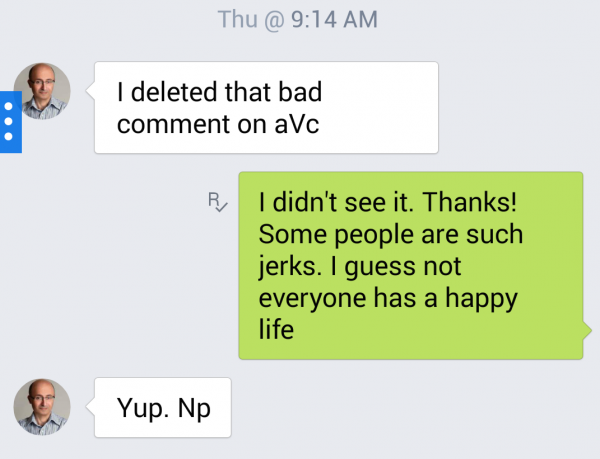 The comment in question was a tasteless comment about the Gotham Gal. William deleted it as I would have.

Had it been a tasteless comment about me, I would more likely have let it stand as I’m inclined to let everyone see how warped these trolls are.

I think Whitney is right that we are unlikely to have an open Internet without trolls. They are annoying, as is comment spam and many other things, but I’d rather have an open forum where anyone can comment, than close things down and lose all that comes from the freedom to say and do what you want.

Trolls are annoying but I am certainly happy to live with them given the alternatives.