The President did one of the gutsiest things he’s done in the six years he’s been in office yesterday. He came out in favor of treating access to the Internet as a basic and essential service that should be approached like phone calls, electricity, water, sewer, and the other utilities we have in our life. Politicians on the right like Ted Cruz immediately reacted negatively.

“Net Neutrality” is Obamacare for the Internet; the Internet should not operate at the speed of government.

What Ted Cruz does not understand is that the Internet in the US already operates at “the speed of government.” Going slow is a feature of government, not a bug. The same is not true of something as essential and important as access to the Internet. Here are global average download speeds by country: 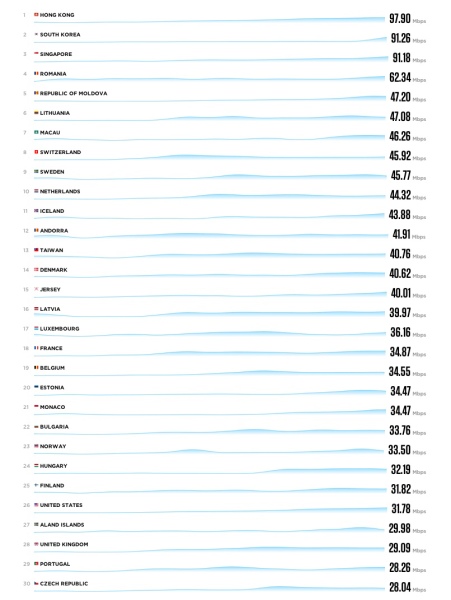 Our communications policy in the US is backward. We have allowed the telcos to capture the regulators and they are spending their dollars lobbying and buying off congress instead of investing in their networks.

But this isn’t really about download speeds anyway, Ted Cruz just thinks it is because he hasn’t done his homework yet to understand the issue. I hope he will.

This is about something more simple and more important. It is about making sure that the Internet remains open and free for innovation. It is about recognizing that the last mile of the wired and wireless internet is a natural monopoly/duopoly where scale creates massive advantages, just like the electrical grid and the water system. It is about making sure that the massive companies that operate these last mile monopolies don’t use their market power to extract rents from the entrepreneurs, developers, and companies that must go through those networks to reach their customers.

This is about keeping the Internet the way it has been operating for the past twenty years. This is a conservative idea. Don’t change something that has worked so well for so long. Don’t allow the telcos to start inspecting each packet and prioritizing some over others. Because that is what they want to do, and are doing, and we as a society cannot allow that to happen. Thankfully the President understands this issue. My hope is politicians like Ted Cruz will step back and take the time to really understand this issue because it is a conservative and pro business idea. This is something the GOP should get behind instead of fighting. And I’m happy to come down to Washington and explain it to anyone who is willing to listen.