Yesterday I was cleaning up a google spreadsheet that contained a data dump I wanted to do something with. The spreadsheet had a bunch of blank rows and columns and garbage data in it that I needed to remove. So I was going through the sheet deleting stuff, moving stuff, and in general cleaning it up. It was super boring work. I got about half way through this mundane chore and was so bored that I decided to tweet about it to relieve the mental drain this chore was creating for me.

This is what I tweeted out: 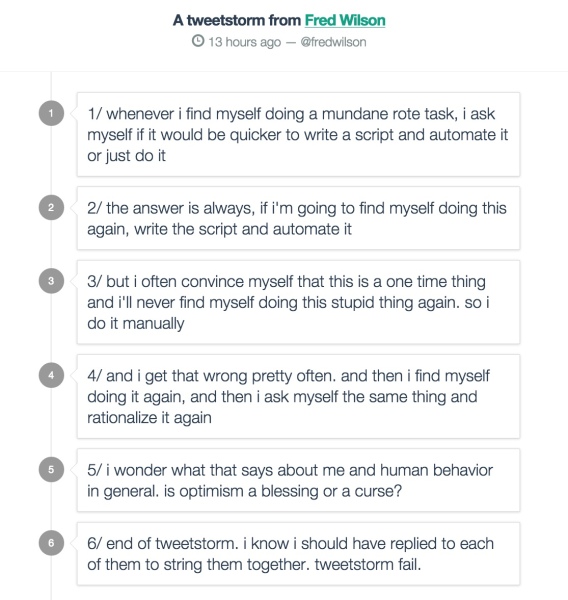 I don’t think I will ever have to do the same set of cleanup actions that I did yesterday afternoon and I don’t expect to get a data dump in that general format again so I think the decision not to write a cleanup script was the right one. I got through the cleanup in about 15-20 minutes, not including the time I spent on that tweetstorm, and it would have probably taken me as long or longer to write the script to automate the cleanup.

So I think I made the right call.

@fredwilson always automate and open source it. You never know who will need to use it in the future! #dogood

And I thought to myself that my current “script or not” algorithm is a selfish one and I need to add another factor which is a modification of the 2nd tweet in the tweetstorm. It should be “if I or others are going to find ourselves doing this again.”

Thanks Francesca for correcting me on that one.