I saw my partner Andy tweeting last night about the first time certain words showed up in Twitter: 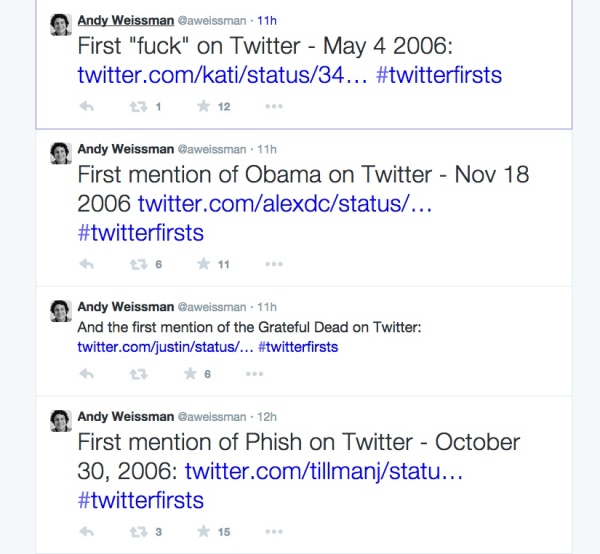 That told me that Twitter had rolled out the ability to search the entire archive. I’m not sure when that happened but this morning I took a trip down memory lane and revisited my first four months on Twitter, from my first tweet on March 12, 2007 until the end of June 2007. The query is “from:fredwilson until:2007-6-30” and it returned these results.

There are a few gems in there but its mostly “I had grilled cheese for lunch” sort of stuff.

What is more interesting is I did four tweets over the span of two days and then stopped tweeting for three weeks. Then I found myself in LA and for some reason I started tweeting again. From then on, I tweeted almost every day for the next three months, sometimes two or three times a day. I was hooked. And lots of good things came of the habit I started in LA in early April 2007.

Here are a few favorites from those early days on Twitter:

celebrating 20 years of marriage today. it’s raining just like it was when we said “I do”

Getting married in a downpour is good luck

Hanging out at the cafes in south park in san francisco on a beautiful spring day. Must have bumped into twenty people in two hours — Fred Wilson (@fredwilson) April 18, 2007

I think this was my first visit to Twitter HQ

spent the morning in brooklyn at etsy. what a cool company. www.etsy.com

My bberry dropped out of my pocket in the cab home. A cool lady named sarah heard the phone buzzing. Got it back in less than 30 mins — Fred Wilson (@fredwilson) May 24, 2007

Hanging with mark pincus and allie. Took a nice walk to the beach with them and the dogs

When I met Ali for the first time (and mispelled her name, sorry Ali). Might also have been when Mark convinced me to invest in Zynga

Anniversaries were big that month for me

Hef hits walkoff homer in the bottom of the sixth to win it. Dodgers are Little League champs

I still remember that moment. The kids went nuts.