I saw this chart in a Harvard Business Review piece called The Great Decoupling earlier this week: 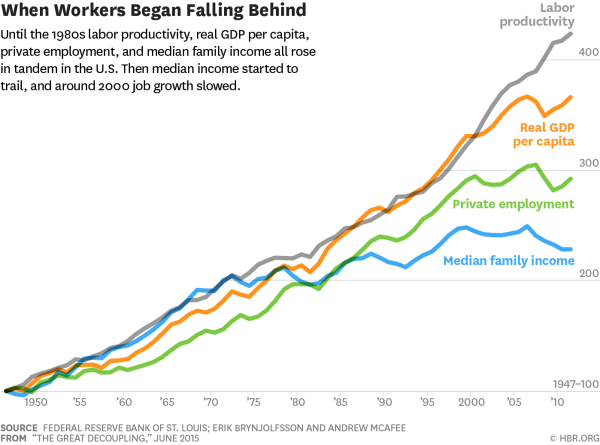 The “decoupling” is the divergence between labor productivity and employment/wages that happened in the US in the 1980s and has become quite pronounced over the past thirty years. During the great postwar boom, productivity and wages grew in lockstep in the US. Of course, we don’t see any data from the 19th century and the first half of the 20th century so it’s not clear that labor and wages have always grown in lockstep. But something certainly changed in the 1980s and the result has not been good for median family income which has been stagnant in the US for almost thirty years now.

The chart and the HBR piece is the focus of work done by Erik Brynjolfsson and Andrew McAfee, faculty members at the MIT Sloan School of Management. They attribute this great decoupling to the emergence of “digital technologies.” I would imagine the initial decoupling had as much to do with globalization and the pressure on wages that global competition for jobs in many sectors created. But, as we’ve discussed here before, the mechanization of information work, which Brynjolfsson and McAfee call “The Second Machine Age“, will accelerate this trend and it already seems to be doing that.

When I showed this piece to may partner Albert, he responded with disappointment for the policy ideas that the professors put forth as potential solutions. Those ideas are; education, infrastructure, entrepreneurship, immigration, and basic research. Albert is right that those are not new or original policy ideas and though I spend a fair bit of time and money on three of them, I do wonder if they will not be enough. So does Albert and here’s a policy idea he has been suggesting.