There are some who suggest the mini run in the price of Bitcoin this month is related to the crisis in Greece. I wouldn’t know about those sorts of things.

But one thing is clear to me. Photos like this one from the NY Times showing people lined up outside a closed bank do not produce confidence in the banking system. 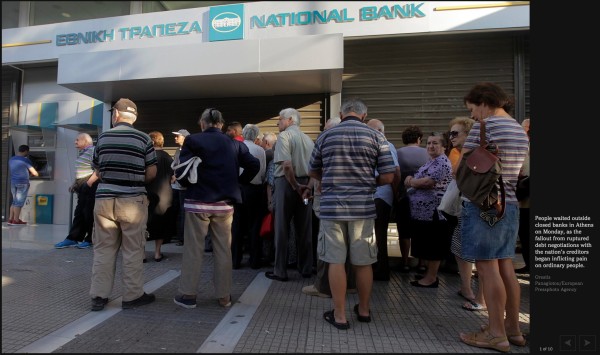 The hardcore cryptocurrency community wants to control their money themselves, with ownership of the keys to it, and the ability to move it when and where they want.

That’s a comforting thought when the alternative is to trust a bank.

Here in the US, we have FDIC insured deposits, a relatively safe and secure financial system, and even in the depths of the financial crisis of 2008, bank customers could access their money when they needed it. But there were a few scary moments.

In other parts of the world, none of that is the case. Which is why I continue to think that we will see more rapid adoption of bitcoin in the less developed world first.

Maybe in Greece. Who knows?