I’ve been watching my friend Kirk and his colleagues Bart and Marc building a mobile app called Pegg for the past year. I’ve had almost every build on my iPhone during that time so I’ve been watching them up close and it’s been a pleasure to see them refine, simplify, and ultimately ship a really fun and engaging product.

Pegg is “your mobile mini mood board.”

Here’s my current Pegg board 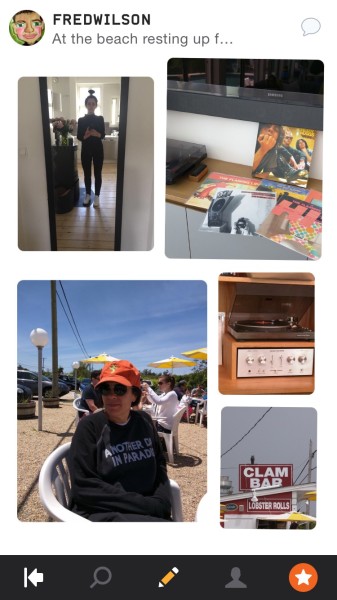 Here is Kirk’s current Pegg board: 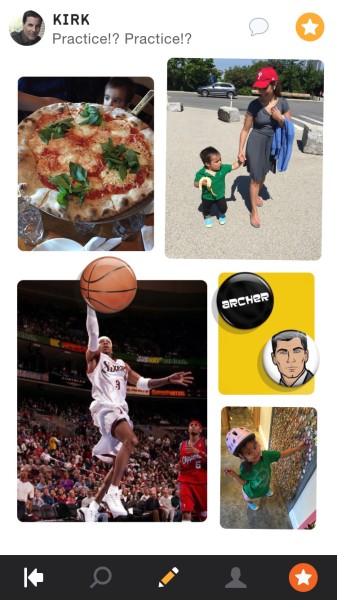 My favorite feature is the ability to quickly drop into a chat with anyone on their pegg board. Here’s the current chat on my pegg board: 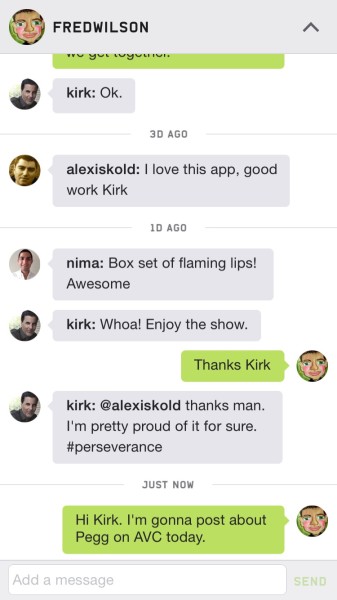 If you have an iPhone and want to try out Pegg, you can download it here.

And there’s also a discussion of Pegg on Product Hunt today.

I recall having my first conversation with Kirk about Pegg at breakfast a year or more ago. He was inspired by the pegg board in his dad’s workshop. He thought that would make a nice metaphor for a board you could update daily with the little things in your life that represent how you feel and what you are doing. His initial concept was a website but he quickly turned his attention to mobile. Along the way Kirk and Bart learned how to design and build a mobile product and added Marc to the team.

The thing that I’ve been the most impressed by is how Kirk has stayed true to his initial vision through all the ups and downs, back and forths, and redesigns they’ve been through. It is so easy to get lost in that process. The product they shipped last week is pretty much the thing he described to me at breakfast when he first mentioned the idea to me. That’s hard to do and so congrats on that Kirk.