The Gotham Gal and I are winding up a four day weekend in Istanbul. She likes to blog about the places we go and things we do so if you want to read about all that visit her blog. I expect the posts on her blog will be all about Istanbul for the next few days.

There is something about the uptake of technology in Turkey that is somewhat unique. Facebook blew up in Turkey fairly early in its international phase. Foursquare’s Swarm is so popular in Turkey that you would think the product was started here. We’ve seen similar stories in other USV portfolio companies and also companies that have pitched us. So one of the things I’ve been looking at while we’ve been here are clues to the behaviors that make this happen.

The most obvious thing you see is the almost total obsession with mobile phones. Everyone has one and everyone is using them. You might think using mobile phones during meals or conversations is rampant in the US, but in Turkey it is way more rampant. It is clearly the social norm to be on your phone at the same time you are hanging out with other people.

It also seems that the phones are cheap and there also seem to be a number of wireless carriers active in the market. We got good data service everywhere we went in Istanbul. The speeds were great and the data was reliable and abundant. Phones and prepaid cards are sold everywhere. I haven’t looked deeply at any reports on this but on the surface it seems that the wireless industry (carriers and handsets) have done a good job of competing vigorously and bringing price points down and service quality up. Maybe the US could learn a thing or two from Turkey.

We also found wifi to be offered in most venues in Istanbul. I have been using WifiMap (which I blogged about a few weeks ago) and you can get wifi in almost every place you walk into around town. So for people on mobile data plans who want to offload to wifi when possible, Istanbul is a good place to do that.

Turkey also seems economically quite vibrant so most people apparently have the means to afford the basics (phone and mobile data) and yet they are not developed enough that they made massive investments in the last generation internet infrastructure (desktops, laptops, wired internet, etc). So it’s a place where social, mobile, local, messaging can take off as well as anywhere in the word and doesn’t necessarily have other older solutions to these needs.

Here is a slide I found on the Internet that is from early 2014: 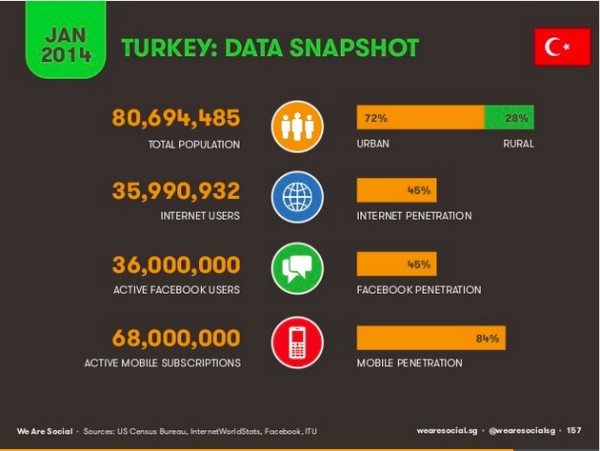 Mobile penetration in Turkey was 84% in early 2014, likely higher now, and that is about the world average. But given the size of Turkey, the total mobile population was 68mm in early 2014, as big as many european countries.

So Turkey is a place where technology, particularly mobile, has taken off. It’s a big market and one that seems to adopt things early on. It’s a good market to pay attention to when you think about international strategies and it is also likely a good place to start companies that focus on mobile products and services.