Web and mobile companies have been using their consumer facing apps to advocate for policies that they care about for a while now. Back in the PIPA/SOPA wars, Wikipedia, Tumblr, and a number of other high traffic apps went black and made a big impact on that debate.

Yesterday Uber added a De Blasio mode in NYC to their rider app. 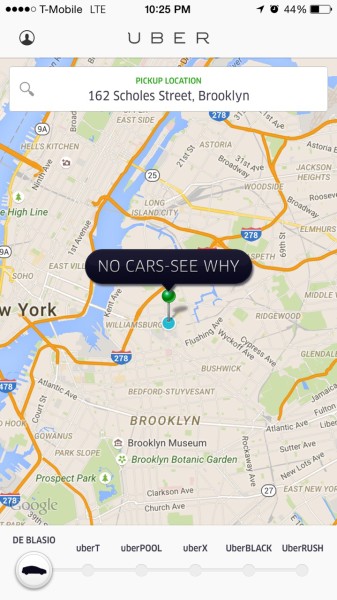 Which takes the rider to this screen:

It will be interesting to see what impact this in app advocacy will have on the Uber debate in NYC.

Uber is fighting this as hard as they can and using in app advocacy as one of their tools to amplify the political pressure.

While this is a smart move on Uber’s part, I am not sure it will work because the constituency that elected Mayor De Blasio is more of the subway rider crowd than the Uber crowd.

But NYC politics are complicated and Uber is working the system hard. And using in app advocacy to further their cause.