Mario Cantin asked me to post some stats on the AVC readership in the comments to yesterday’s post. So here is some data from Google Analytics, Disqus, Feedblitz (which powers the daily email), and Feedburner.

Here are the high level google analytics stats for avc.com for the past twelve months:

That works out to be about 240,000 sessions per month and the average number of users per month is about 180,000. New visitors represent about 50% of visitors so about 750,000 visitors in the past year have come to avc.com at least once before.

There is a loyal readership that reads via email (using feedblitz). The total email subscribers right now is 10,972. These people read the daily post in their email and often reply to me via email and generally don’t participate in the comments.

There is also a RSS audience though it is relatively small. Feedburner provides these stats: 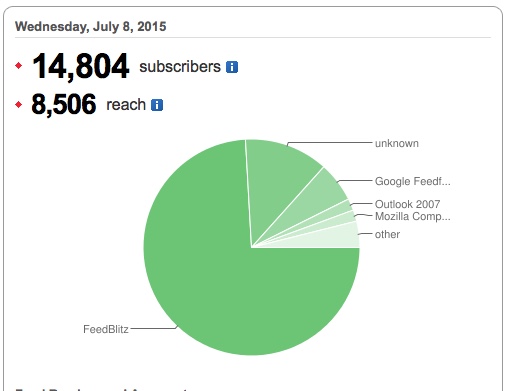 The 14,804 total RSS subs number includes the 10,972 that subscribe via email via Feedblitz. I power Feedblitz via my RSS feed via Feedburner. The “reach” number is the daily number of people who actually read the post. That’s about 60%. The people who subscribe via email or RSS are truly regulars although they don’t visit the website and they normally don’t comment.

If you buy that reach number, then roughly 8,500 people a day read AVC via email or RSS. That is about the same number as the daily sessions on AVC. So I’ve generally assumed a daily readership of around 15,000 people.

The commenter community is much smaller. Over the past year, 4,036 people have commented on AVC and have left a total of 46,100 comments (an average of 126 comments a day). Certainly a lot more people than that read the comments, but I don’t have a number for that group.

The geographic distribution of people who visit avc.com (a subset of the total audience) looks like this: 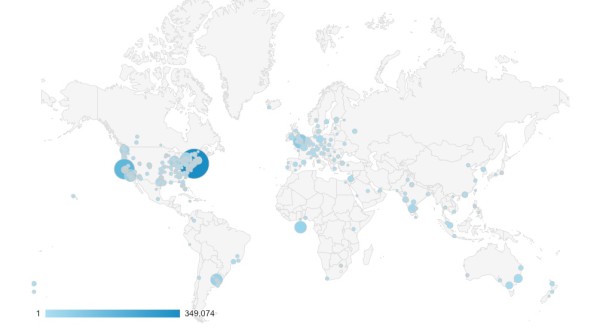 I’ve been told a number of times that avc.com is blocked in China but I have never verified that and it may not be true now or in the past. If it is true, I am very proud of that fact.

Here are the top cities and countries: 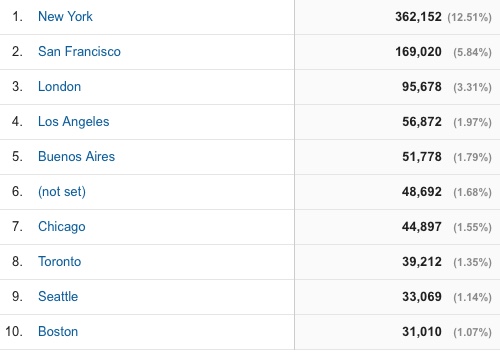 All I have to say about this list is “fuck yeah Buenos Aires”. 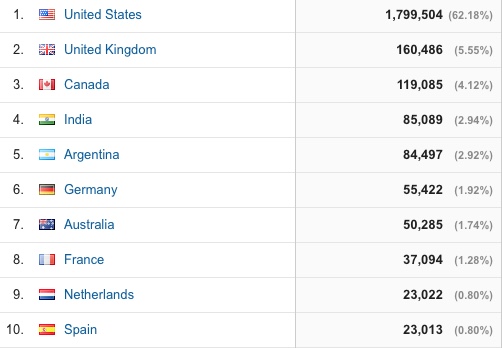 I just turned on demographics yesterday so this data is brand new and only reflects yesterday. I will publish it again after a few months as one day of traffic may not be representative (you can click on the image to see it in a larger form):

The avc.com readership is young and male. No surprises there. The 19% female audience something I don’t feel great about and hope to change over time. I got some great suggestions on how to do that yesterday in the comments.

That’s about it for now. I hope you enjoyed this data dump. I try to do this once a year but Mario said he’s been reading AVC for over a year and hadn’t seen a post like this in his “tenure”. So we’ve fixed that now.