Video Of The Week: Notifications Summit

A few weeks ago Betaworks put on a notifications summit. I could not attend but thankfully the entire event was recorded and is up on the Internet. All of the sessions are good and it was hard to pick one to feature. I am going with the last one, featuring April Underwood of Slack, Naveen Selvadurai of Expa, and Ben Brown of XoXco.

AVC regulars will recall that I blogged about a Kickstarter that the NY Historical Society is doing to bring the Telstar satellite back to NYC for its Silicon City Exhibit.

The project has four days left and is still a few thousand short of its goal. I’d like to have some fun on AVC today and get this project funded.

Once the project crosses its $10k goal, I’m out. You all can continue to back it. I am sure they would love to raise more than the $10k goal. But I’m matching all funding that is made on Kickstarter and reported on AVC today until the project reaches it’s $10k goal.

In other fun matters, here is AVC community member Jeff Carter wearing a Mets t-shirt (1969 vintage!). This was the result of the bet we made on this blog over the Mets Cubs series. 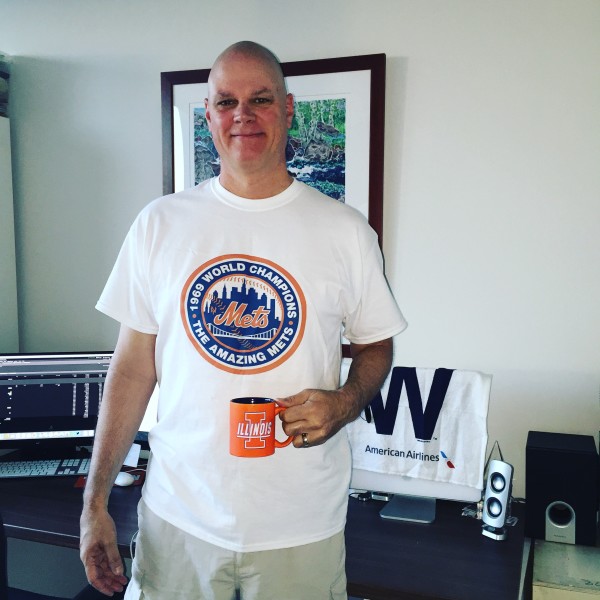 That Time Of The Year

Last night I got home to watch the World Series and turned on the TV and fired up Twitter. In addition to the Mets Royals, you had the GOP Debate, and fourteen NBA basketball games. Twitter was on fire. I didn’t change the channel once on the TV, choosing to continue my pain from the night before and watch the Mets lose back to back games to the ferocious Kansas City Royals. But my Twitter feed kept me apprised of everything else going on. The Knicks beat the Bucks, the Bulls beat the Nets, KD is back and the Thunder beat the Spurs, and, apparently, Rubio had his coming out party last night in the GOP debate. I’ve always thought the GOP race was eventually going to come Rubio’s way. He’s the best of the bunch even though I prefer Kasich.

I will leave you with this. Twitter does SportsCenter.

Highlights from a wild night in the NBA

Where Is The Value In The Tech Stack?

Yesterday’s discussion was fantastic. Days like that are where the USV community really shines.

David argued that data is the new oil, not software. There’s a lot of validity in that comment.

Kirk pointed out that ISPs are the pipelines of the digital revolution and I liked that.

And TR followed Kirk with this observation:

What they were all discussing is the tech stack and where the value is.

A simple version of the tech stack of the information revolution would look something like this:

At USV, we have invested mostly in the top three layers, and most actively in layers four and five (Applications and Data), but we are increasingly drawn to Access and Infrastructure (software).

But, as I tried to point out in the Dentist Office Software Story, software alone is a commodity. You need data to provide defensibility and differentiation. And so most of USV’s investments have been companies that combine software and data to provide a solution to the market that we believe is defensible, usually via network effects which are a data driven phenomenon.

So why would we move down the stack to Infrastructure (software) and Access? Well there are data driven network effects in those layers too if you know where to look for them. And, increasingly, we are finding them there and finding them at prices that make a lot more sense to us too.

So, in summary, I agree with David that software alone is not the new oil. But neither is the entire tech stack. That’s why I moved away from the phrase “tech is the new oil” that I used in the comments the day before. I also don’t think data alone is the new oil.

The new oil is going to be found in various places in the tech stack where software and data come together to produce a service that has high operating leverage at scale and is defensible by the network effects that the data provides. That’s a mouthful. Software is the new oil sounds a lot better. But the mouthful is more accurate.

Software Is The New Oil

I was with some friends this weekend and one of them was talking about an investment committee meeting he attended and there was a discussion at that meeting about some of the threats out there in the macro investment landscape. One of them was “vanishing liquidity” and the significant change in net cash flows from the global oil sector. Oil producing regions have gone from being a massive cash generator to a relatively small one in the past few years. Now this could well be a temporary thing as the oil market adjusts to some new realities. This post is not really about oil, even though that word is in the title of this post.

It makes sense to me that software is the oil of the information revolution. Companies that control the software infrastructure of the information revolution will sit back and collect the economic surplus of the information revolution and that will be a path to vast wealth and economic power. It has already happened but I think we are just beginning to see the operating leverage of these software based business models. The capex spending necessary to be a software infrastructure provider at scale has shielded the cash producing power of these companies (and many others) and may continue to do that for a time, but I suspect at some point the profits are going to overtake the capex at a rate that the cash will be flowing out of software companies the way that oil flows out of wells.

Full Disclosure: The Gotham Gal and I own a lot of Alphabet stock and also shares in several hundred other software based businesses. We are long software.

Mark Suster wrote an interesting post on the state of the VC business this weekend.

In it, he makes this comment and puts the blame on the current rabid environment on “outsiders”:

If “the market” is driving up prices beyond intrinsic value the main new entrants to the market that have taken a less rational view of historical prices are a series of “non VCs” including corporate investors, hedge funds, mutual funds and crowdsourcing. Note that I’m not absolving my industry, venture capital, from bad behavior. I’m merely pointing out that price drivers are more strongly correlated with outsiders.

The question I always try to ask myself about new entrants in a market is “are they stupid or do they actually know something we don’t?”

Or said another way, are they outsiders or are they disruptors?

Combine that with Jerry Neumann’s recent post observing this:

Where are we in the cycle? Perez, in a 2013 paper10, says we are now in the deployment period. This has big consequences for how you run your business.

This quote makes a shocking claim I didn’t think the Transition audience would be interested in: financial capital’s job is done.

“Financial Capital” is VCs (and mutual funds and hedge funds). Production capital is corporations investing their capital in the innovation cycle now that it is well understood. Think Alphabet.

So I’m not sure I would go there with Mark. It’s tempting but might be the wrong place.

Serving Workers In The Gig Economy

USV’s very own Nick Grossman has co-authored an ebook for O’Reilly Media called “Serving Workers In The Gig Economy” and you can get the ebook here.

This book came out of a year or more of research that Nick has done on this sector for USV. We’ve been thinking that there are investments to be made in this sector and although we haven’t made one yet, we continue to think that’s the case.

Nick and his co-author Elizabeth Woyke cover a lot of ground in a this book, but it’s a quick read at roughly 50 pages.

If you are interested in the future of work, the gig economy, union 2.0, and/or related issues, you should give it a read.

Video Of The Week: Why Marketplace Lending Is Better

Samir Desai, founder and CEO of our portfolio company Funding Circle, which is the global leader in small business lending marketplaces, gave a great talk at Lendit this past week. It starts with a bit of an advertisement for Funding Circle, but Samir quickly gets into an explanation of why marketplace lending is a better way to do the loan business. If you want to understand why marketplace lending is growing massively around the world and why it is the future of the lending business, watch this video. It’s about 25mins long. 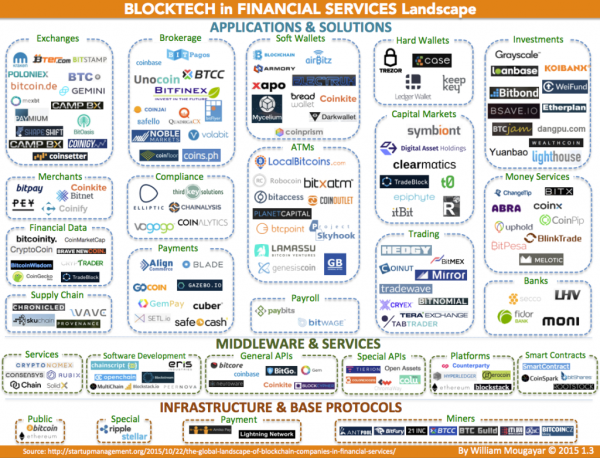 Putting together something like this is a major pain in the butt, but it is incredibly useful for people (like VCs and other investors) who are trying to make sense of an emerging market. It’s a great way to get your name and reputation out there. It reminds me of what Terry Kawaja did with ad:tech five or six years ago.

I could critique some of William’s placements (for example Coinbase is one of the top five exchanges in the world and yet is not included in that category), and I’m sure that countless companies are now reaching out to William saying “why are we not on your map?”  So this will get picked apart and it will evolve. But the act of taking the time to put something like this together and publish it is incredibly useful for everyone. Kudos to William for doing that.

The conversation we had on this blog a couple weeks ago about Twitter becoming a journalistic entity by hiring editors to curate Tweets and create what is now known as Moments was interesting. But it missed something important about Moments that I did not realize at the time. Moments will be a platform for anyone to curate Tweets and publish them as Moments. I figured this out yesterday in this tweet conversation with Madhu who is Twitter’s product manager for Moments.

@fredwilson as per our policies we don’t cover ourselves: https://t.co/ZIDqyOrJn3 — sorry!

@justmadhu i guess that makes sense. but i bet your users want to you to. at least i do.

When anyone can create a Moment and publish it into Twitter’s Moment stream, then we will have something very interesting. A crowdsourced newspaper.

Think about following an event like Twitter’s Flight conference via the Moments interface. It would be way better than all the liveblogging services that I had to rely on yesterday as I wanted to follow what was going on there.

But a curated set of tweets could be used to cover a lot of interesting stories and events. You can see the potential of it in the current Moments stream, but the total number of Moments is small and not that many of them are interesting to me right now. Opening up Moments as a platform will change all of that. I can’t wait until that happens.