The Google Now app has slowly but surely become one of the most used apps on my phone. I use it to keep track of my favorite sports teams, stock prices, weather, travel times to my meetings, and, most importantly, stories I want to read. I have never told Google Now what I want to read about but using all that Google knows about me, and that is quite a bit, Google Now always has something interesting to read for me.

This morning there were roughly twenty story cards in my Google Now feed. They are an eclectic mix of stuff. This screenshot from my phone shows a small sample of them. 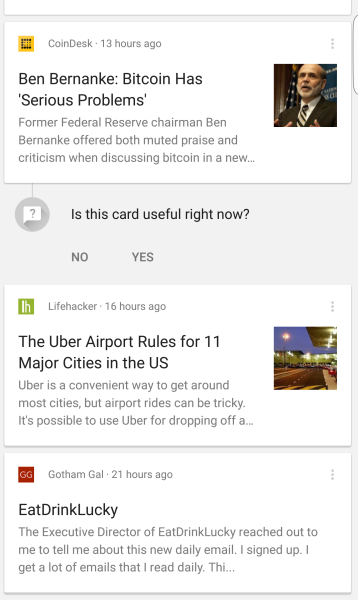 I like the user experience of swiping the stories out of my feed after I’ve read them or if I don’t want to read them. I can also leave them in my feed to “read later” by not swiping them away.

I also like the “is this card useful” question that you see in the screenshot above. I’m not sure what causes that prompt but I always answer it because I know it’s making Google smarter about me.

I’ve tried many news apps over the years. None of them have ever stuck for me. Google Now stories has stuck. It’s really good.