I wrote this “mobile downturn” post 18 months ago. It rings more true today than when I wrote it.

Some friends emailed me about investing in a mobile consumer startup last week and my reply to them included this line:

doing anything in the consumer mobile space these days is super hard. i can’t think of many consumer facing mobile apps that have gained massive traction and sustained it in the past three years. can you?

I saw this post this morning in my news feed. It goes over all the reasons why it is so hard to break out in mobile. We’ve been through all of these reasons ad nauseam here for years and years. This is not a new thing. But this chart from that post certainly sums up the challenge: 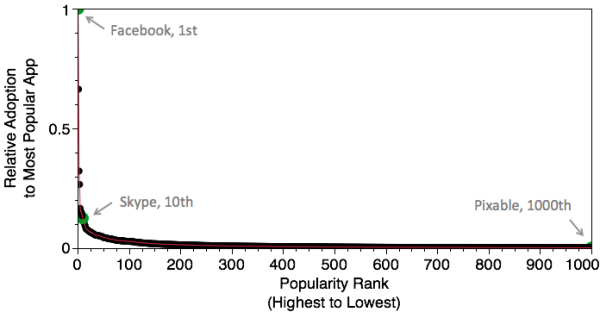 So if you want to launch a new consumer mobile app, what do you do? The best answer I have heard to that question came at breakfast yesterday with an entrepreneur. He said he plans to build mobile web experiences that can go viral and build adoption of his product and use that as a funnel to drive adoption, over time, to his native apps. I’ve seen that work.

The funny thing about all of this is that I don’t see any shortage of entrepreneurs walking into our offices with plans to build and launch consumer facing mobile apps. While the odds are increasingly against them, hope springs eternal it seems.