AVC folks will know that my first foray into K-12 Computer Science Education work, which has now become almost a second full-time job, was the effort four years ago to open NYC’s first dedicated computer science high school. That high school is called The Academy For Software Engineering (AFSE) and this year they will graduate their first class. Here is Tylor Fields, AFSE’s first student to be accepted to college. 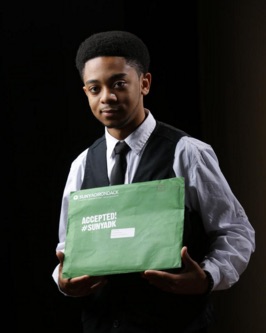 There will be many more college acceptances at AFSE over the course of the next few months. And a number of AFSE students will be going on to study computer science in college.

Students at AFSE receive 4 years of computer science courses, opportunities for internships and real work experiences, and 4 years of one-on-one mentoring with professionals in the tech community.

In addition to graduating its first class this year (with a graduation rate in excess of 90%, which is off the charts for an unscreened high school in the NYC public school system), AFSE is also doing it’s first annual fundraiser this year.

If you would like to buy a ticket to the event or donate to it, you can do so here.